As states seek to address climate change resilience following the Paris Agreement by committing to ‘foster climate resilience and low greenhouse gas emissions development’, they appear to be willing in so far as such measures do threaten food production” (SDG Indicator 13.2.1). An analysis of the palm oil industry in Indonesia exposes a potential rights conundrum amidst the seventeen Sustainable Development Goals (SDGs). Asia Centre’s Dr. Robin Ramcharan dissected this apparent conundrum in relation to the Palm Oil industry in Indonesia in a lecture to the Leuven Center for Global Governance in Belgium on 20 December 2018. 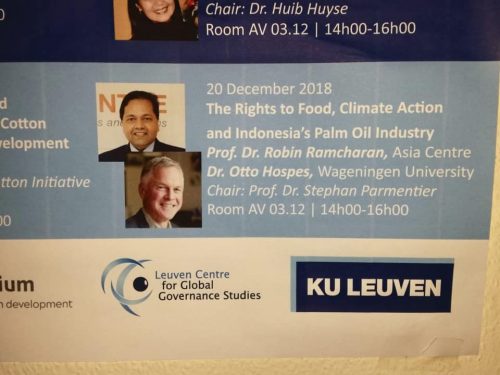 The palm oil production, which is dominated by Indonesia, followed by Malaysia, is one of the largest contributors to greenhouse gas emissions and deforestation. It is traded globally and brought in $18 billion to the Indonesian economy in 2017. At the same time it contributes to the livelihood of millions of small-hold farmer households in Indonesia and Malaysia and is healthier than other vegetable oils. This healthier vegetable oil is consumed by hundreds of millions in China, India and Pakistan and around the world as palm oil is used in many food products that we consume.

The goal of a healthy environment (captured across Goals 6, 13, 14) is seemingly pitted against the right to food and food security (captured in Goals 2 and 3), which includes right to healthy and nutritious food. The SDGs seek outcomes that will advance human rights, though the goals are not framed in clear human rights terms, which is indicative of the discomfort that many states have with international human rights norms at the present time. 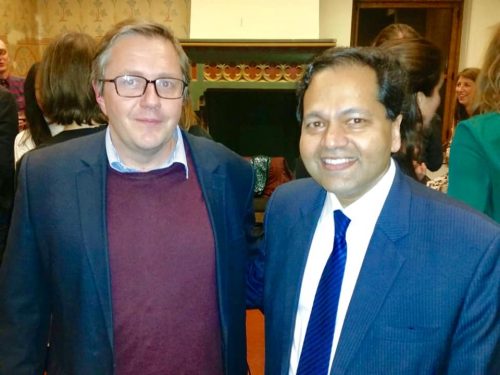 The protection of the “environment” per se, or a “right to a healthy environment” is not articulated in international environmental law (IEL) or the SDGs, though they point to it. The international human rights regime perhaps considers the environment more amply, by recognizing the linkages between the environment and the realization of a range of human rights: life, health, food, water and housing. General Comments 14 and 15 of the Human Rights Committee have commented on Articles11 and 12 of the ICESCR, indicating that it includes access to sufficient, safe and affordable water for domestic and sanitation, the prevention and education of exposure to harmful substances including radiation and chemicals, or other detrimental environmental conditions  that directly or indirectly impact upon human health. In 2009, the UN Human Rights Council resolution 10/4 noted that “…climate change-related impacts have a range of implications, both direct and indirect, for the effective enjoyment of human rights including, inter alia,…the right to adequate food,…and human rights obligations related to access to safe drinking water and sanitation, and recalling that in no case may a people be deprived of its own means of subsistence.”

This includes food security, a pre-condition for the right to food. It exists, according to the Food and Agriculture Organisation, “when all peoples, at all times, have physical, social and economic access to sufficient, safe and nutritious food that meets their dietary needs and food preferences for an active and healthy life.” The Universal Declaration of Human Rights proclaims in Article 25 that “Everyone has the right to a standard of living adequate for the health and well-being of himself and of his family, including food…” ICESCR Article 11 recognises the same. Procedurally, it recognises the duty of states to “improve methods of production, conservation and food distribute” and to “[take] into account the problems of both food-importing and food-exporting countries, to ensure an equitable distribution of world food supplies in relation to need.” General Comment 12 (1999) of the CESCR recognized “the right to adequate…is also inseparable from social justice, requiring the adoption of appropriate economic, environmental and social policies, at both the national and international levels, oriented to eradication of poverty and the fulfillment of all human rights for all.” It required States to adopt national strategies “to ensure food and nutrition security for all.”

Indonesia’s palm oil industry faces this dilemma: ensuring adequate supplies of nutritious food for its peoples while addressing urgency of climate change effects. It is experimenting with measures such as moratoria on new palm oil plantations though this will not be enough. Moratoria decreed by the President have little impact on pre-existing permits and local administrations are not bound by these Presidential decrees.

The EU and Norway both seek to assist Indonesia. Both seek to tackle climate change resolutely through the EU’s emphasis on renewable energy and, in Norway‘s case, by helping Indonesia offset costs of reduced deforestation. At the same time, the  EU is also a major buyer of palm oil from Indonesia, precisely for use in biofuel. Fortunately, oil palm requires less land, has higher yields, has a quick turn-around and requires lesspesticides.

Palm oil cultivation is here to stay and its impact on the environment will continue, hopefully at a reduced pace. All measures to tackle the impacts on the climate must be balanced against the livelihoods and food security of millions in Indonesia and abroad.

Asia Centre will continue its exploration of human rights aspects of the SDGS and human rights and looks forward to future collaboration with the Leuven Centre for Global Governance. 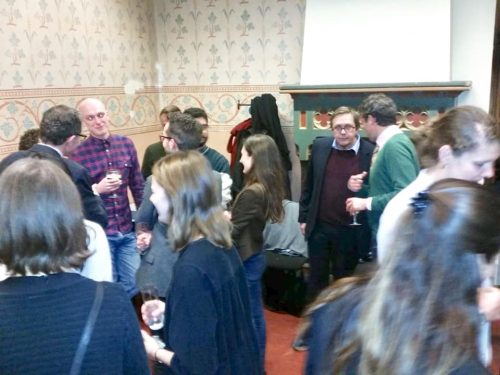