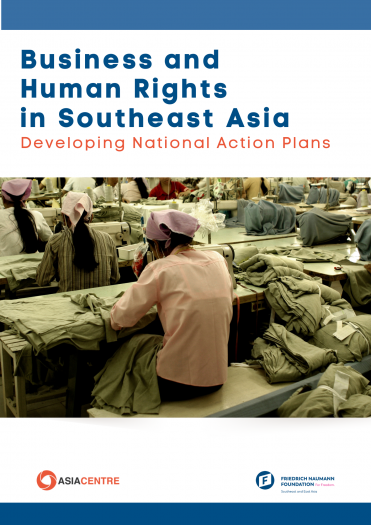 Business and Human Rights in Southeast Asia: Developing National Action Plans examines the progress made in Southeast Asia towards developing National Action Plans (NAPs) on Business and Human Rights (BHR). A decade after the adoption of the United Nations Guiding Principles (UNGPs) on Business and Human Rights, has there been an uptake in NAPs in the region? What are the various NAPs development processes and platforms across the region? Have all stakeholders been consulted? What are the obstacles to deepening the NAPs processes and the BHR agenda in the region? This work finds that: 1) An initial grudging uptake by States has engendered a cascade in slow-moving NAP-developing processes; 2) Following Thailand’s lead in adopting a NAP in 2019, others are poised to do the same, notably in Indonesia and Malaysia, though efforts have been delayed by the COVID-19 pandemic and political uncertainty; 3) While national commissions on human rights and civil society organisations had initially taken the lead in pushing for NAPs on BHR, buttressed by the earlier adoption of NAPs in other parts of the world, Southeast Asian States began to consider NAPs processes within the past few years; 4) Key stakeholders have been largely absent from the NAPs development processes across the region: parliamentarians and business organisations – the former due significantly to the lack of awareness of the BHR agenda and non-participation in Executive-led processes and the latter due to lack of interest in and understanding of the BHR agenda; and 5) A key challenge to NAPs development processes is their alignment to international human rights standards. This work was produced in partnership with the Friedrich Naumann Foundation for Freedom, who like the Asia Centre, seeks to build awareness of BHR in the region. This work is part of Asia Centre’s exploration of the regional human rights architecture. 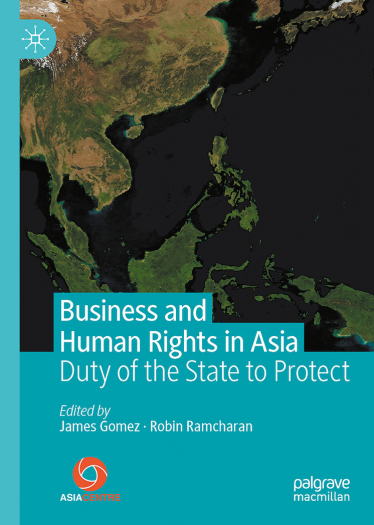 Business and Human Rights in Asia: The Duty of the State to Protect examines the State’s duty to protect amidst rising concern over the human rights impact of business organisations in Asia. States in the region have recently begun to consider the need for rules and policies in this area. This work examines the upswing in interest in business and human rights (BHR). It focuses on the duty of the State in the region to uphold their existing obligations, which has hitherto been understudied. It examines a range of inter-connected issues: the advent of international standards, the UN Guiding Principles on Business and Human Rights, the challenges inherent in the formulation of National Action Plans on business and human rights, the need for improved legislation and policies, access to remedies and conflicts with indigenous peoples over business activities. The book also treats innovative themes such as BHR in the era of smart cities, ethical consumer behaviour and a human rights management system, which are emerging areas of enquiry in relation to business and human rights. It concludes with a range of critical issues to be addressed, including the need for an assessment of COVID-19 pandemic’s impact on BHR in Asia and beyond. This book is part of Asia Centre’s exploration of the nascent regional human rights architecture that is facing significant challenges in protecting human rights. The body of work offered by this book showcases the progress achieved and challenges across Asia. 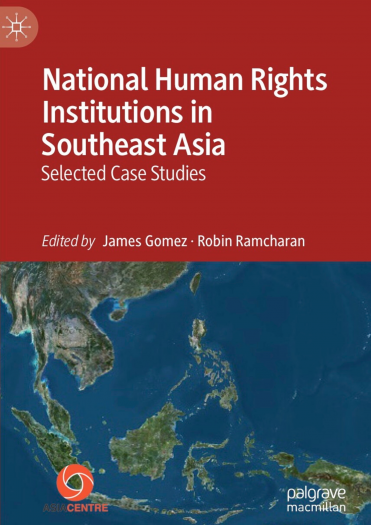 National Human Rights Institutions in Southeast Asia: Selected Case Studies is part of an emerging assessment of a nascent regional human rights architecture that is facing significant challenges in protecting human rights. As part of this architecture, the book asks can NHRIs overcome its weakness and provide protection, including remedies to victims of human rights abuses? Assessing such capacity is vital as the future of human rights protection lies at the national level and other parts of the architecture – the ASEAN Intergovernmental Commission on Human Rights (AICHR), the international mechanism of the Universal Periodic Review (UPR) – are helpful but also have their limitations. The critical question the book addresses is whether NHRIs individually or collaboratively provide protection of fundamental human rights. The body of work offered by this book showcases the progress of the NHRIs in Southeast Asia where they also act as a barometer for the fluid political climate of their respective countries. Specifically, the book examines the NHRIs’ capacity to provide protection, notably through the pursuit of quasi-judicial functions, and concludes that this function has either been eroded due to political developments post-establishment or has not been included in the first place. The book’s findings point to the need for NHRIs to increase their effectiveness in the protection of human rights. The book is an invitation to readers and stakeholders to find ways of addressing this gap. 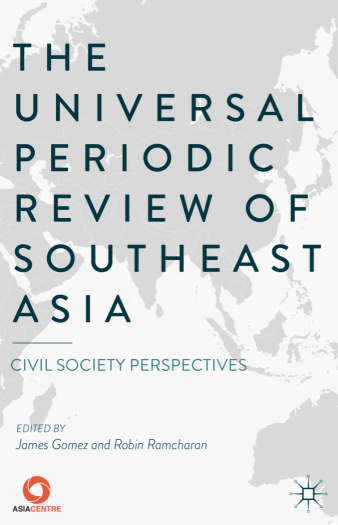 The Universal Periodic Review of Southeast Asia: Civil Society Perspectives provides a stakeholder analysis of human rights protection on the ground. The book reviews Southeast Asia’s civil society engagement with the Universal Periodic Review (UPR) of the United Nations Human Rights Council during the first (2008-2011) and second (2012-2016) cycle. Through evidence-based research the book identifies gaps in human rights reporting and advocacy during the UPR, notably on civil and political issues such as the right to life, freedom of expression, freedom of religion and belief, extrajudicial killings, arbitrary detention, territorial autonomy and separation. The book highlights the need for more civil society engagement on civil and political issues during the third cycle of the UPR in 2017-2020. Failing which, the UPR process risks being reduced to a platform where civil society only engage on issues that States are willing to cooperate on. More pressure needs to be put on States to follow-up and implement recommendations. The book is the first regional appraisal of the UPR in Southeast Asia. It is based on the human rights programme of the Asia Centre.