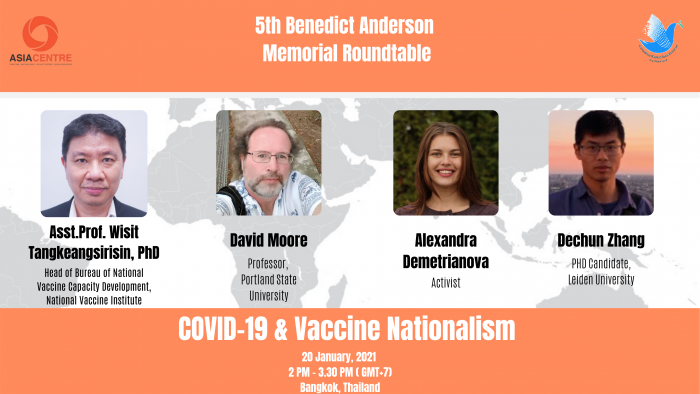 Rich countries have placed orders, received consignments and have begun inoculating their citizens, however, the reality of needing to inoculate foreign residents in their midst makes vaccination nationalism irrelevant. This was the general view emerging from Asia Centre’s webinar on 20 January 2021 entitled “COVID-19 and Vaccine Nationalism”. Asia Centre, in partnership with the Thai Media Fund and Taiwan Foundation for Democracy, convened its 5th Benedict Anderson Memorial Roundtable in remembrance of the late professor’s work on nationalism.

The event was attended by 64 online participants with 798 Facebook Live views during the session. The session brought together academics, activists and health experts from all over the world to discuss the topic of vaccine nationalism. The opening remarks were given by Asia Centre’s Executive Director, Dr. Robin Ramcharan who outlined the key themes related to vaccine nationalism. He pointed out that vaccine nationalism primarily stemmed from competition to be the first to develop the vaccine and national pride in doing so. However, he asked the speakers and audience what is the reality on the ground?

The first speaker was Asst. Prof. Wisit Tangkeangsirisin, Head of the Bureau of National Vaccine Capacity Development, from the National Vaccine Institute in Thailand. He provided an overview of the blueprint for COVID-19 vaccine access for Thailand. According to the national strategy he presented, there are three ways: 1) domestic R&D for vaccines; 2) technology transfer from AstraZeneca pharmaceutical firm and; 3) vaccine advance purchase agreement. He updated the audience on the progress of Thai’s vaccine development, noting that the mRNA vaccine from the Chula Vaccine Research Center is at the first clinical trial phase.

The second speaker, Dr. David Moore, from Portland State University explained that nationalism is a product of the movement of people and commodities and provided insights into the rise of nationalism in the United States of America under Donald Trump’s presidency. Dr. Moore’s view was that more people are holding to ideas of national identity amidst fear of losing it to the impact of globalisation.

Dechun Zhang, a PhD candidate at Leiden University was the third speaker. He presented on the development of COVID-19 vaccine in China. He listed the top three state-connected companies and their progress in the global vaccine race. He pointed out the Chinese characteristics of secrecy and non-disclosure in the way in which the vaccine was developed and distributed. This, he said, was the reason behind the growing but unspoken distrust among the Chinese population about the domestic vaccines.

The final speaker was Alexandra Demitrianova, an activist from Slovakia and an Asia Centre’s Associate. She approached the topic from an European Union perspective highlighting the inequality between nations and the rising sense of nationalism within the members of the union. She said financial and political power member countries in the EU varied, and as a result, the smaller and weaker members benefit from an umbrella EU approach in acquiring vaccines for the whole block.

Asia Centre’s Regional Director, Dr. James Gomez, responded to the speakers. He said, vaccine nationalism is intellectually and practically problematic because at the end of the day countries cannot limit themselves to vaccinate only their citizens. From a public health perspective, countries would have to also inoculate foreign residents within their jurisdiction to protect the whole resident population.  Politically, and in terms of public relations, to deny foreign residents the vaccine would be a political and PR disaster. The key questions would be who will pay for this and what happens if poorer countries cannot afford it.

This then opened the debate among the speakers and audience on how to make the vaccine equally available to all nations, especially the poorer ones. The main takeaway was vaccine nationalism cannot hold up, because this issue is global. Most countries have a significant dependency on economic cooperation with others in various forms including geopolitical alliance, movement of goods and the movement of people.

This event is the 5th Benedict Anderson Memorial Round Table convened by Asia Centre.  To date Asia Centre has convened the following memorial roundtables: