celebrated the life and work of the late Professor Anderson. Held on 30 January 2016 at Asia Centre in Bangkok, Thailand; the event attracted a diverse audience of about 40 people including friends and colleagues of Anderson, as well as students and members of public who were keen to learn more about the scholar and his work.

Professor James Gomez, Associate Dean (International Affairs) at the School of Communication Arts, Bangkok University and co-founder of the Asia Centre, opened the event by discussing how Anderson’s work sits in relation to his contemporaries. Professor Emeritus Charnvit Kasetsiri; a prominent historian and Thai studies scholar, shared the eulogy he gave at Anderson’s funeral in Surabaya. He spoke of his friendship and camaraderie with Anderson and provided insight into the man behind the work.

Anderson’s Imagined Communities: Reflections on the Origin and Spread of Nationalism revolutionised our understanding of nationalism. We revisited the discourse on the subject by debating the motion “This House Believes That Nationalism Can Be A Force For Good”. Proposing the motion was Professor Lipi Ghosh, Director for the Centre for South & Southeast Asian Studies, University of Calcutta and Professor Sean Matthews, Head of School of Modern Languages & Culture, University of Nottingham (Malaysia). On the opposition there was Professor Coeli Barry, Chair of the Masters Programme in Human Rights, Institute of Human Rights and Peace Studies, Mahidol University and Professor Zaharom Naim, School of Modern Languages & Culture, University of Nottingham (Malaysia). 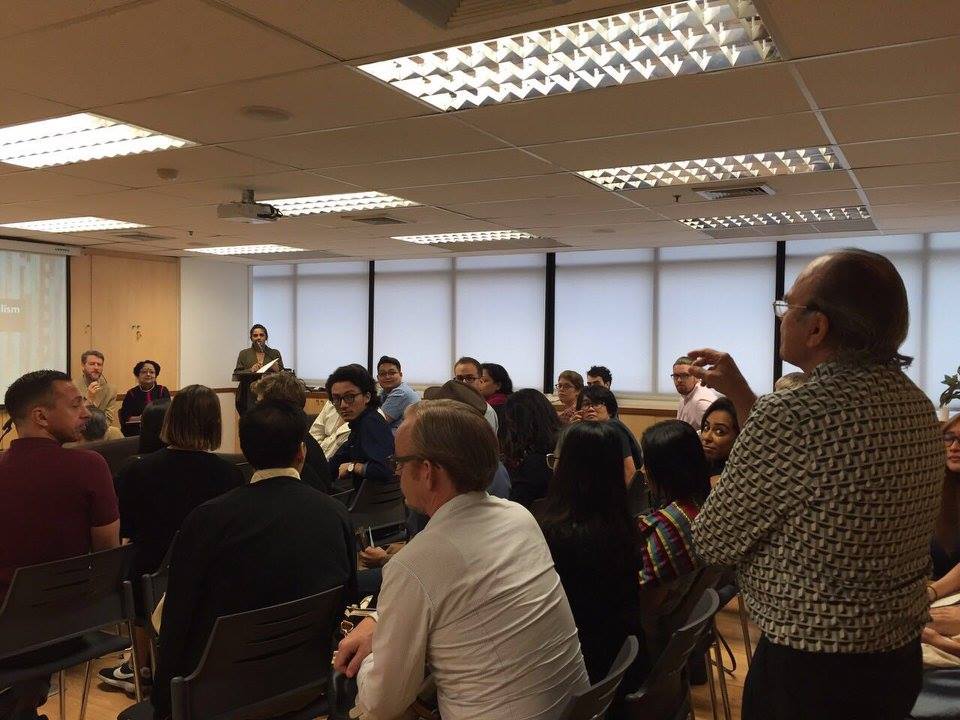 understanding of nationalism, its’ continued relevance in contemporary society as well as alternatives ideologies that could be used to foster the development of ‘imagined communities’. The debate then opened to the floor for members of the audience to share their own thoughts, analysis and to pose questions to the debate panel. Both teams put up a good fight and ultimately, the outcome of the debate was determined by the audience who voted in favour of the Opposition.

We were also pleased to be able to host the Bangkok launch of Prof. Lipi Ghosh’s new book India- Myanmar Relations: Historical Links to Contemporary Convergences. Prof Ghosh’s work centres on India’s pivot towards Southeast Asia and examines how India’s relationship with countries in the region has developed and evolved over time. 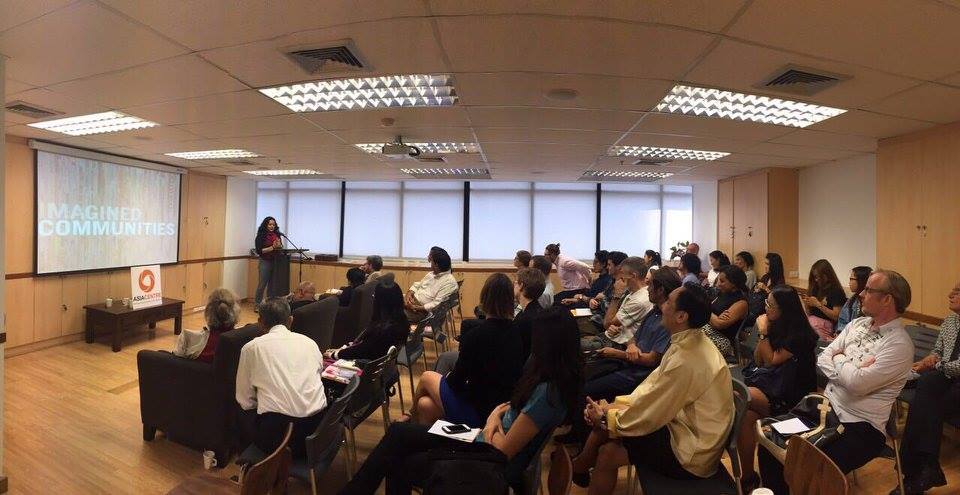 The final segment of the programme was the Open Mic session where we were presented with two very interesting takes on the topic of nationalism. Poet, teacher and public speaker, Ms Puja Singh talked about her experiences as an ethnic minority in Nepal and how this shaped her identity and perspective. Mr Otgonbaatar, a Mahidol University student who is originally from Mongolia, played a Mongolian pop-song that drew on the celebrity of the country’s leading singers along with imagery of its glorious past and evocative song lyrics to raise national sentiment. Dr Kenneth Houston, then closed the event by sharing some of his own personal experiences with nationalism in the context of Ireland’s tumultuous history. 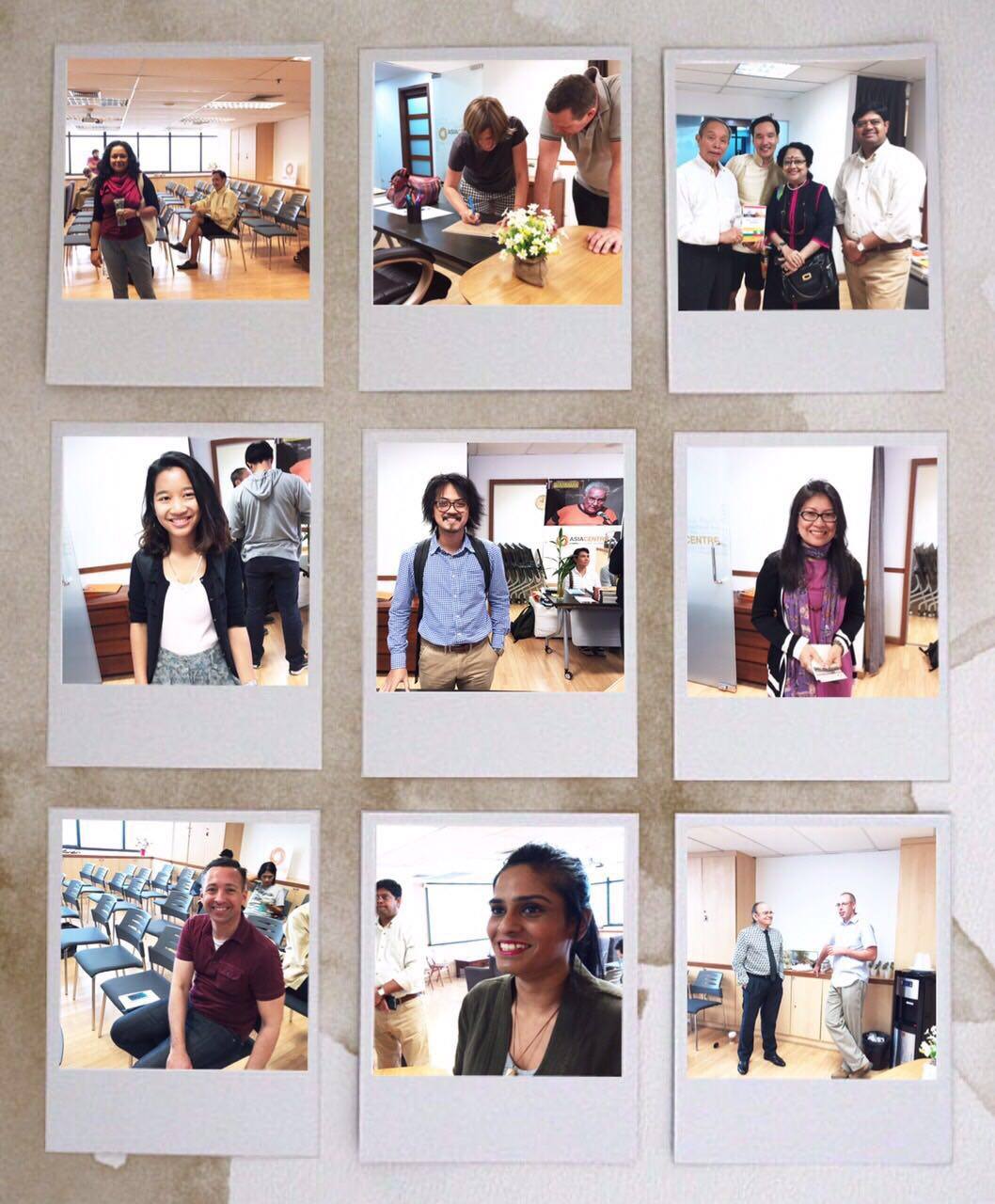 The debate and open mic session were a wonderful platform to engage with Anderson’s work. Today some 32 years after its initial publication, the issues raised in Imagined Communities remain relevant in a globalised world that is struggling to grapple with  increasingly cross-border and transnational problems.

Benedict Anderson (26 August 1936 – 13 December 2015) was best known for his 1983 book Imagined Communities: Reflections on the Origin and Spread of Nationalism. Anderson was Professor Emeritus of International Studies, Government and Asian Studies at Cornell University and a renowned historian and political scientist. As scholar of Southeast Asia, his unflinching account of the Indonesian anti-Communist purges of 1965-66; which saw over 500,000, massacred, helped undermine the official whitewashed narrative and consequently saw Anderson banned from Indonesia until 1998. Anderson was also a polyglot who contributed extensively to scholarship on the relationship between language and power in the region, and was fluent in Bahasa Indonesia, Javanese, Thai and Tagalog. Anderson passed away in Malang, Indonesia on 13 December 2015 at the age of 79.