The ongoing war in Ukraine has accelerated several key challenges to the ASEAN-European Union (EU) relationship. These challenges include the EU’s unclear role in mediating the great power relationship in the wider Indo-Pacific region, a difference in approach towards regional integration, trade negotiations hampered by the political contexts of ASEAN states, and non-aligned over human rights issues that prevented the deepening of relationships. Despite these challenges, there is a desire within both regions to work towards maintaining and strengthening this strategic partnership.

This was the primary sentiment that emerged from the conference “ASEAN-EU Relations in light of the War in Ukraine”, co-convened by Asia Centre with the Friedrich Naumann Foundation, Regional Office for East and Southeast Asia on 17 June 2022 at Radisson Blu Plaza Bangkok. The conference discussed developments since the elevation of the ASEAN-EU relationship to a “strategic partnership” in 2020. The conference had 4 thematic panels with a total of 14 speakers and was attended by over 150 people that included representatives from civil society organisations, diplomatic missions, government units, development aid agencies, the media and universities. The conference’s program can be found here. 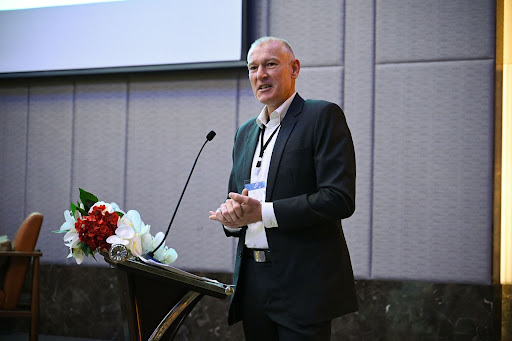 Opening the conference, Moritz Kleine-Brockhoff, Head, Regional Office Southeast and East Asia, Friedrich Naumann Foundation argued the importance of regionalism as the foundation for peace in the EU as well as in the ASEAN. Dr. James Gomez, Regional Director, Asia Centre welcomed the participants and panelists and shared findings from the Centre’s closed doors consultations. He said the consultations revealed that 1) the majority of ASEAN states want to be neutral, 2) the peoples’ feelings and values opinion in ASEAN countries are divided over the war in Ukraine, and 3) the idea of the EU is still unclear among most people in ASEAN. 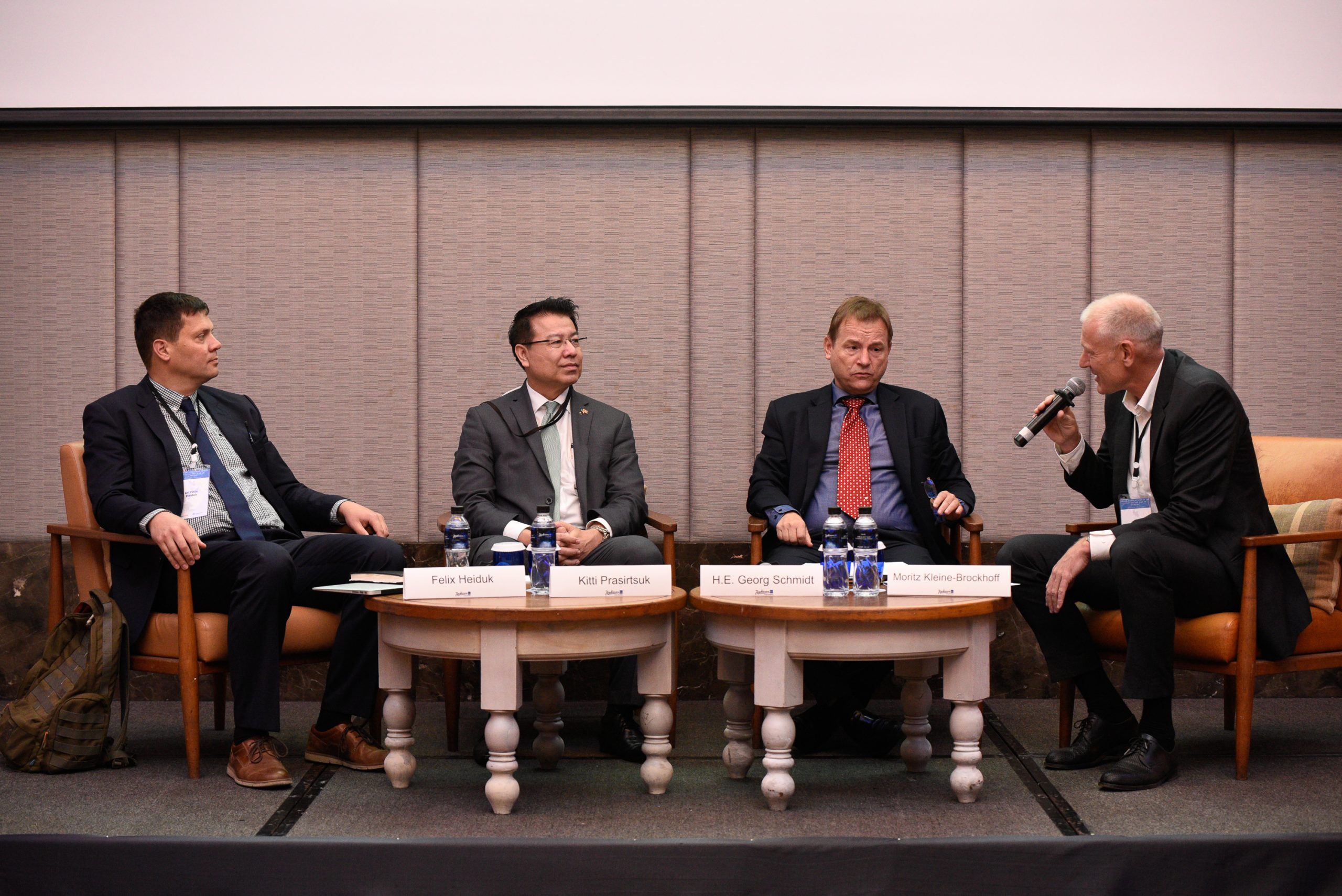 The first panel, titled “Geo-Politics and Security”, discussed the value that the EU could provide to ASEAN countries in the midst of the US-China great power rivalry. The panel, moderated by Mr. Kleine-Brockoff, included H.E. Georg Schmidt, Ambassador of Germany to Thailand, Dr. Kitti Prasirtsuk, Professor, Faculty of Political Science, Thammasat University and Dr. Felix Heiduk, Asia Division, Stiftung Wissenschaft und Politik, German Institute for International and Security Affairs. Although ASEAN sees the EU as a key actor who could ease tensions over the US-China great power rivalry and support ASEAN in setting up an inclusive mechanism, the deepened relationship between EU and the US following the Ukraine war is driving the EU away from ASEAN. Given that the Ukrainian war will be protracted, it is also likely that the EU would divert its resources to secure its borders and reduce attention towards ASEAN. Hence, rather than trying to get ASEAN to side with the EU over the war in Ukraine, the panel discussion veered towards how EU leaders can help ASEAN navigate the big powers over the conflict. 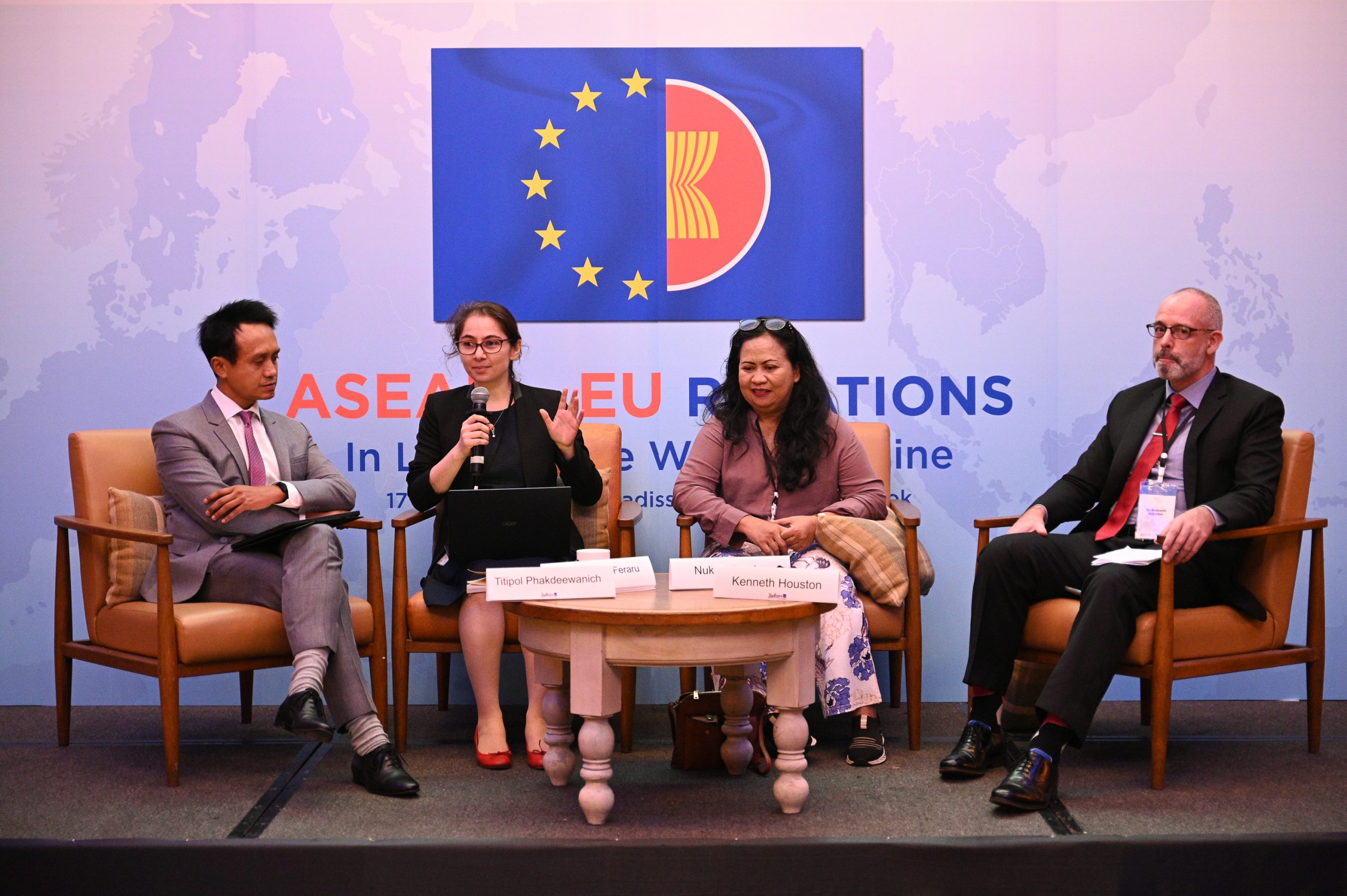 The second panel, entitled “Regional Integration”, was moderated by Asia Centre Associate Dr. Kenneth Houston who was joined by Nukila Evanty, Country Director, Rights Foundation, Atena Stefania Feraru, author of “Weak States, Vulnerable Governments, and Regional Cooperation: An ASEAN Case Study” and Dr. Titipol Phakdeewanich, Director, Regional Center for Human Rights at the Faculty of Political Science of Ubon Ratchathani University. The panellists discussed the challenges faced by ASEAN and the EU regarding their respective approaches to regional integration as well as the lack of information and progress in cooperation and collaboration between the two regions which were further weakened by the War in Ukraine. The key reason why there is a stalemate is because the EU operates on a set of principled goals for cooperation, centralisation, and unity. On the other hand, ASEAN has a non-interference policy that is based on compromise as opposed to principles. As a result, the EU goals of cooperation with ASEAN will be unattainable, unless a different approach is considered. 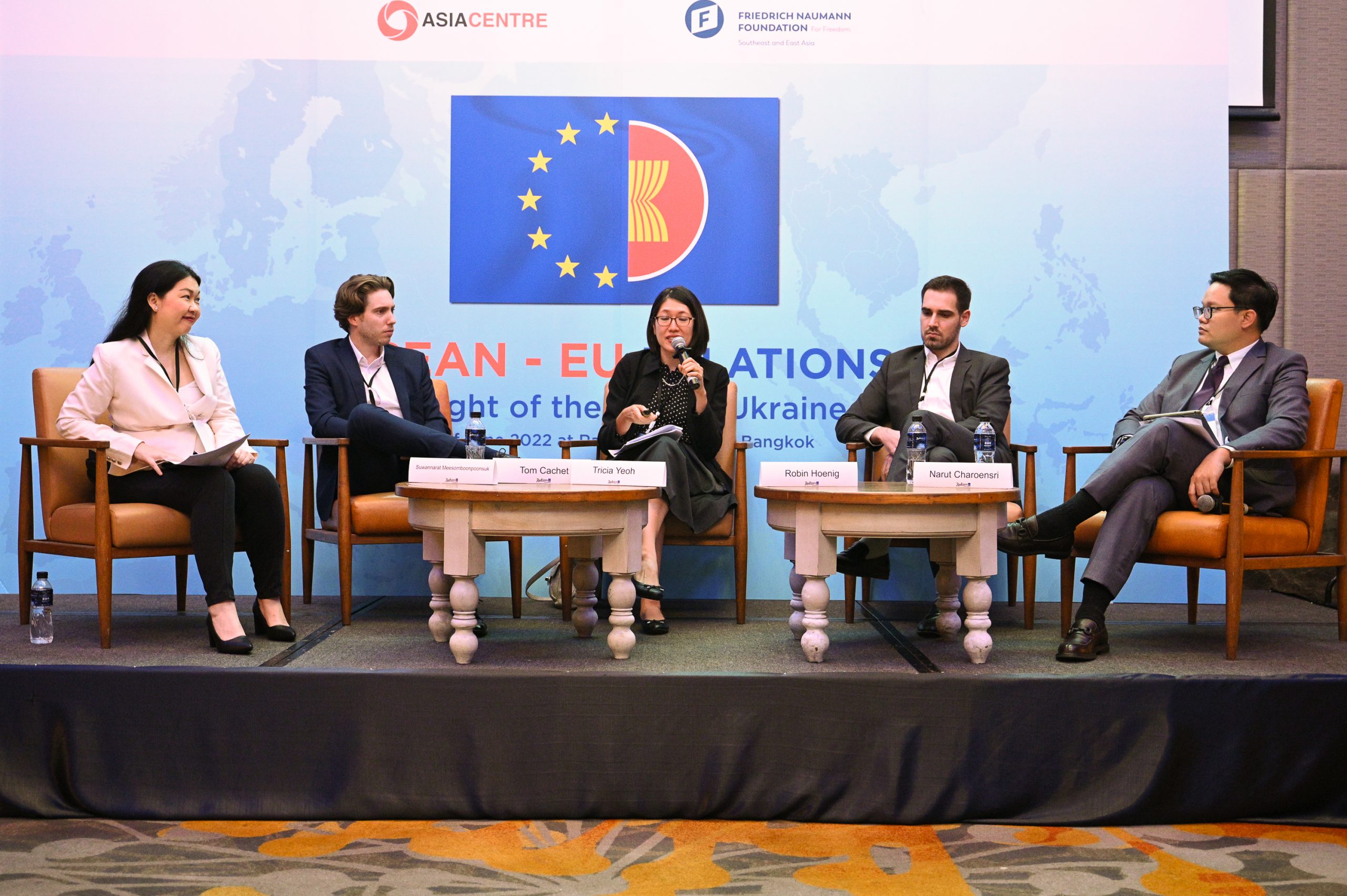 The third panel on “Trade” was moderated by Dr. Narut Charoensri, Vice Dean of the Faculty of Political Science and Public Administration, Chiang Mai University and included Robin Hoenig, Divisional Head, at Trade Policy Competence Centre; Tricia Yeoh, CEO of IDEAS; Tom Cachet, Chairman of Thai European Business Association (TEBA) Supply Chain Management Committee and Dr. Suwannarat Meesomboonpoonsuk, Lecturer, Southeast Asian Studies at Thammasat University. The panellists listed the existing issues that caused suspension of the agreements including: the ASEAN way; the lack of negotiation capacity; technical barriers; lack of political will; strong opposition from local producers as well as national regulations. Supply chain disruption as a result of the Russia and the Ukraine war, climate change and protectionism that flourished after the COVID-19 outbreak further added challenges to the agreements. To reach the ASEAN-EU Free Trade Agreements, bridging the gaps and increasing flexibility between the two regional blocs were suggested by members of the panel. 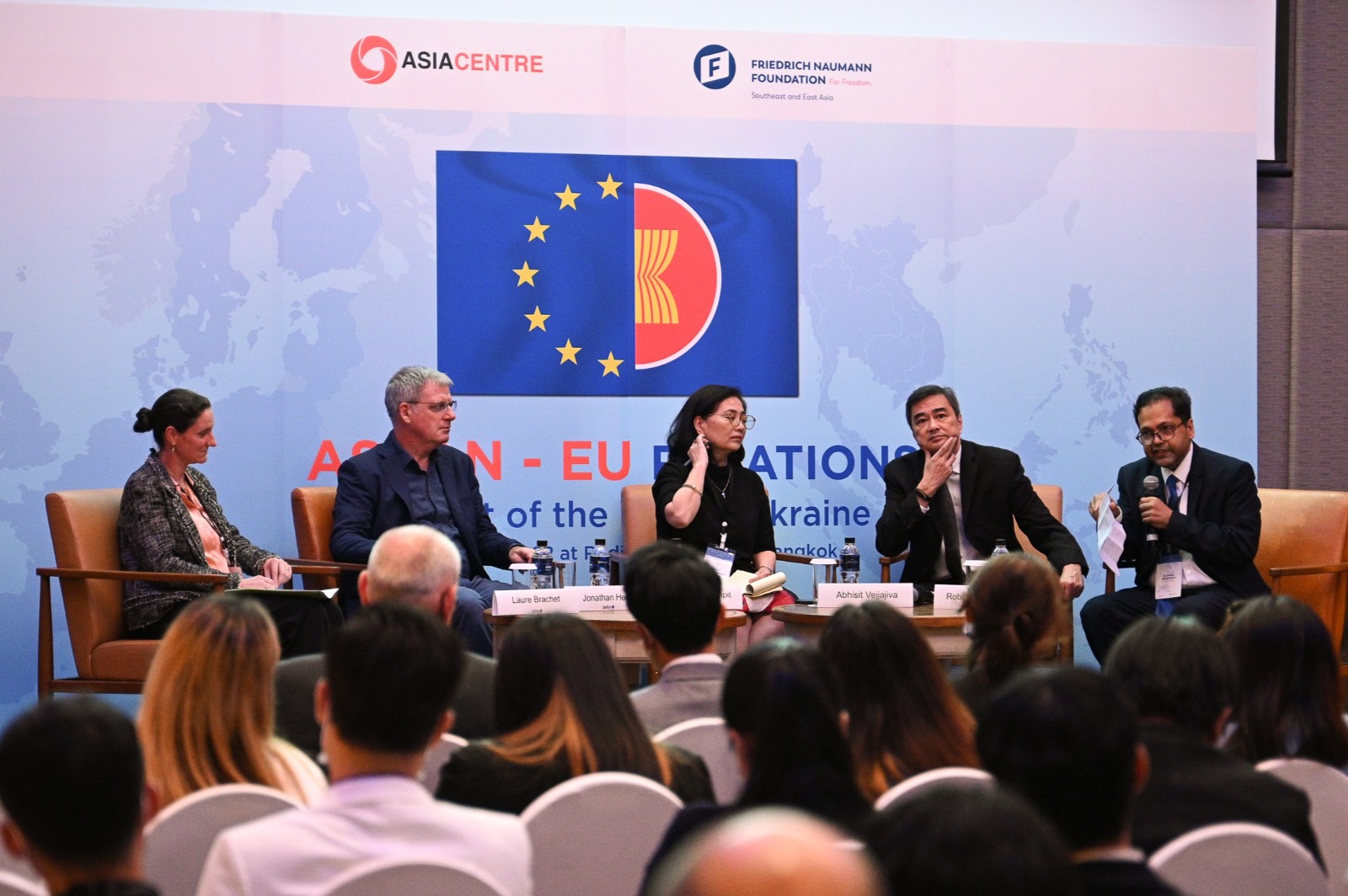 The fourth and final panel entitled “The Future” was moderated by Dr. Robin Ramcharan, Executive Director, Asia Centre, and joined by Abhisit Vejjajiva, Former Prime Minister of Thailand, Karen Gomez Dumpit, Former Commissioner, Commission on Human Rights of the Philippines, Laure Brachet, Head, Political Press and Information Section, EU Delegation to Thailand and Jonathan Head, journalist, BBC News. The panel started with introductory remarks on the need to precisely define the Indo-Pacific concept. The main argument made during the session was the need to further engage on human rights platforms and develop human rights policies to achieve mutually beneficial partnership, as both regions differed in their approaches towards the universality of human rights. Given the differences in approaches by both regions, the discussion focused on how best to find a way that might pave the way for strong future cooperation building. 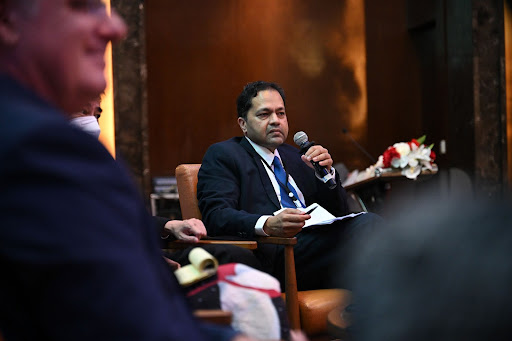 In summing up the fourth session and the conference, Dr. Ramcharan noted three points: 1) While both ASEAN and EU share common values, they need to acknowledge their differences in order for future EU-ASEAN relations to succeed. 2) Given the international political and economic context, future partnership building will be slow. 3) The EU’s position as a model and soft norm entrepreneur can contribute to deeper integration and help build a values-based space. 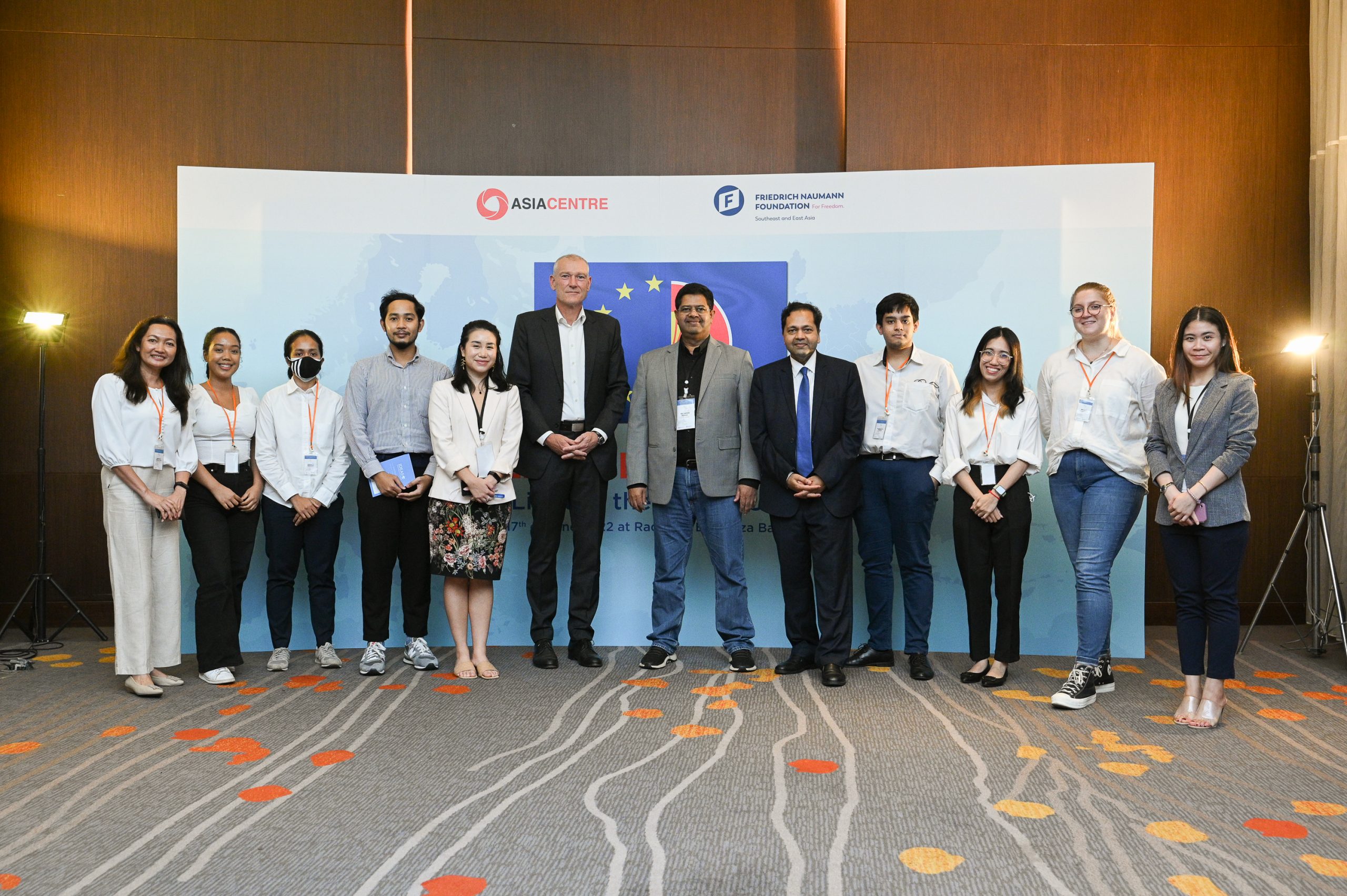 The ASEAN-EU conference is the first fully on-site event, in 2022, organised by Asia Centre, in collaboration with Friedrich Naumann Foundation Regional Office for East and Southeast Asia.  The two organisations will also be working on two other projects related to media freedom and business and human rights in Southeast Asia later in the year.