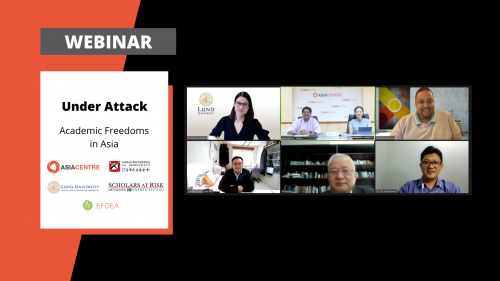 Academic freedoms in Asia have deteriorated as autocracy strengthens across the region. However, in building resilience and fostering change, academic, press and internet freedoms need to be considered together as they form a cluster of rights that collectively make up freedom of expression.

This was the thrust of the interventions by speakers from Thailand, Taiwan, Hong Kong and Indonesia on 21 April 2021 when Asia Centre hosted the webinar, “Under Attack: Academic Freedoms in Asia”.  The event, which attracted over 150 participants and live-streamed over social media (watch here), was co-hosted with Lund University’s Centre for East and South-East Asian Studies, Scholars at Risk network, EFDEA and Taiwan Foundation for Democracy .

In his opening remarks, Asia Centre’s Regional Director James Gomez  made a reference to studies showing the current state of academic freedoms in the East, South and Southeast Asia regions and countries. He said while press freedoms and internet freedoms are widely discussed, academic freedom is one of the less discussed dimensions of freedom of expression which the webinar seeks to address.

Bencharat Sae-Chua, a lecturer from the Institute of Human Rights and Peace Studies at Mahidol University, commented that in Thailand the challenge to academic freedom comes from the ultra conservative elements of society. Royalists and other conservative groups are increasingly acting as vigilantes and attacking academics and students, who they view as being anti-monarchy. As a result, academic work and activities are monitored and these groups actively lobby universities and higher education authorities to expel the students and staff.

In Indonesia, Herlambang Wiratraman, a Senior Lecturer of the Department of Constitutional Law, Faculty of Law at Airlangga University and a member of the Indonesian Caucus for Academic Freedom (KIKA) said, the attacks there mainly come from government officials. The last 5 years have seen a rise in the attack on academics and campuses, by government officials who lack an understanding of academic freedom and they are doing so with impunity. In order to respond to this situation, academics are banding together in groups and associations for mutual support and safety.

Mubashar Hasan from Western Sydney University said that in South Asia such attacks come from academics and students who have different values and increasingly form the majority at many institutions of higher learning. Using examples from Bangladesh, India and Pakistan, he validated his points to show instances where progressive academics were attacked, sometimes with the support of religious groups, for their activities. As a result, academics and students can no longer be seen as being drivers of democratic transition or that pluralistic democracy can be nurtured at universities.

Charles Chong-Han Wu, an associate professor of the Department of Diplomacy, National Chengchi University, said while there is academic freedom in Taiwan, there is a new challenge: the increased commercialization of higher education. This comes from Taiwan’s push to move up in the world university’s ranking which has compelled the government to encourage universities to prioritise and support research that are published in top-notch journals. This means academics now have less choices in terms of the type of research they want to do and where they can publish.

Fu Hualing, a Professor at the Faculty of Law, The University of Hong Kong, pointed to the National Security Law in Hong Kong as the main challenge to academic freedom in the city-state. He said universities are trying to cope with the law while maintaining the spirit of dissent. He said that staff and students need to navigate the law’s prohibition as well as engage in dialogue between the university, student bodies and law enforcement agencies. In doing so, he was optimistic that academic freedom in Hong Kong can be maintained.

Karin Zackari from Centre for East and Southeast Asian Studies and Scholars at Risk, Lund University, Sweden pulled the discussion together. She said that the deterioration of academic freedom around the world coincides with a decline in fundamental freedoms such as freedom of expression. As some rights are often defined by their universality and interdependence, a violation of one is bound to have impacts on another. In other words, the attacks on academic freedom is but a reflection of political repression broadly occurring globally.

The webinar provided an opportunity to review and discuss the challenges to academic freedom in East, South and Southeast Asia. It was clear that the global backsliding of democracy has had an impact on academic freedoms.