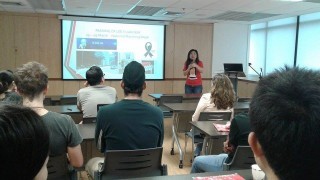 Singapore is not the political utopia that it projects itself to be. Beneath the veneer, lies a dystopia of political repression, self-censorship and culture of fear. This was the nub of Jeannette Aruldoss’ presentation at Asia Centre on 19 March 2016.

Aruldoss, a lawyer and an opposition candidate of two election campaigns, shared some of her personal experiences from campaigning in 2011 and 2015 and provided a succinct overview of the political system and raised questions about its efficacy.

Some 30 odd attendees came with a healthy dose of scepticism as well as support for the city-state. Jeannette Aruldoss’ cutting critique of the PAP’s landslide victory in the 2015 elections both engaged and provoked questions from the mixed audience during the lively Q&A session.

In the April edition of the Asia Centre Seminar Series, we explore the practice of female genital mutilation(FGM) and how it is documented and portrayed in the media. Entering Femininity: Reporting Rituals & Violations happens on 30th April (Saturday) from 9.30am to 12noon at Asia Centre. For more details click here.