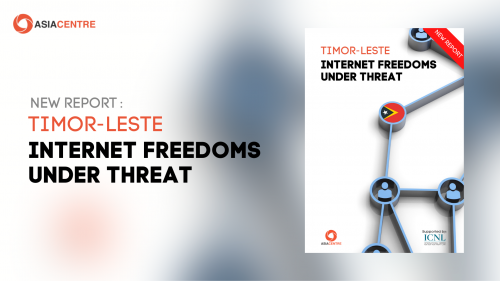 Timor-Leste’s government must set out clearly defined steps in the drafting process of its legislation, including ensuring there are consistent and adequate opportunities for consultation with the country’s stakeholders. These concerns over inadequate consultation have arisen on the back of three proposed laws on defamation, cybercrime and privacy that stand to impact internet freedoms. 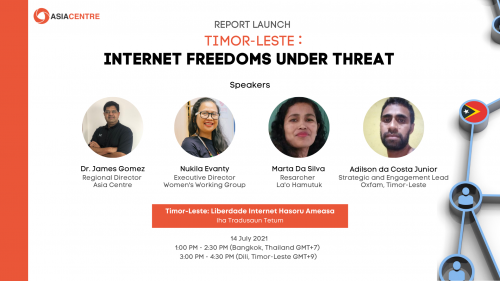 The draft Criminal Defamation Law, proposed in June 2020, would reinstate criminal defamation in Timor-Leste’s Penal Code and provide an easy path to criminalise critical opinions against the state or its officials. The draft Cybercrime Law, proposed in January 2021, does not provide adequate protection to human rights defenders who call out rights violations by accessing online data, and poses concerns for data privacy and protection due to its vague nature. While the draft Data Privacy and Protection Law is not publicly available as of 14 July 2021, its provisions must prioritise the protection of citizens’ right to privacy.

These “internet” laws are seen as likely to be used to reel online political expression as the country experiences increased internet connectivity and a rise in the use of social media to progress democratic ideals. The sharp scrutiny of government figures and critical debate on digital platforms has resulted in a push for legislation that can be used to crack down on criticism.

These were the key issues aired during Asia Centre’s report launch “Timor-Leste: Internet Freedoms Under Threat” held on 14th July 2021, where the Centre shared its report findings on the impact of these laws on the state of internet freedoms in Timor. (watch here). 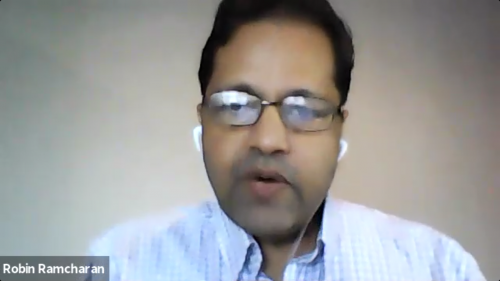 Dr. Ramcharan, Executive Director at Asia Centre in his opening remarks to signify the report launch, made reference to the French Bastille Day – on the same day as this event. He said that this flashpoint of the French revolution had a significant and lasting impact on freedom of expression in France, paving the way for increased political debate and critique. The internet, Dr. Ramcharan added, is the needle that has moved the political debate in contemporary Timor.

Dr. James Gomez, Regional Director at Asia Centre, then went on to present the findings of the report. He detailed the impacts that current legislation has upon digital freedom, and the concerns and potential impacts that the new draft laws may have on freedom of expression. The report also provides specific recommendations, enabling the promotion and protection of internet freedoms, freedom of expression and access to information online in Timor-Leste.

Contextualising the report, he said that in order to understand the full gravity of the recent legislative developments in Timor, one should look at Southeast Asia as a whole and draw lessons from its experiences. Dr. Gomez directed the audience to examples within the Centre’s other report: Myanmar: Dismantling Dissent – Crackdowns on Internet Freedoms, where it displays that unscrupulous operators in critical sectors such as telecommunications are uncongenial for fostering democracy.

Nukila Evanty, Executive Director of the Women’s Working Group, addressed internet freedoms through a gender lens. She highlighted that women and girls everywhere, including in Timor-Leste, continue to face discrimination online. The low affordability of smartphones continues to make internet access difficult for them. However, women are still more active on social media compared to their male counterparts, particularly with the running of small businesses and activism. The elimination of barriers of inequality should be prioritised to enable increased involvement of women in public and political participation. 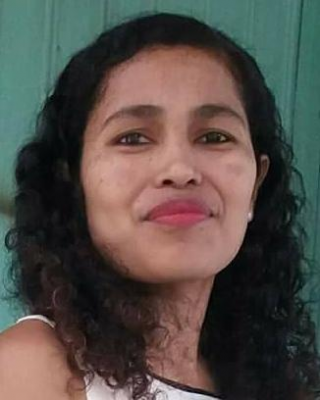 Marta Da Silva, researcher at La’o Hamutuk, highlighted the need for greater consultation with civil society in relation to the legislative drafting process. This however, comes with an issue of language accessibility. Many Timorese do not understand Portuguese, the sole language of parliament, creating a conspicuous information void and making political participation difficult for the majority.

She noted that digital security is also a concern. As the country’s critical infrastructure opens up to foreign direct investment, people’s rights to privacy needs assurance, and the government needs to find the means to effectively implement these safeguards. She ended with a call for the promotion of a safe internet space through a ban on pornography and disturbing or graphic images. She believes such a ban would be a good step in preventing sexual assault, online bullying and harrassment. 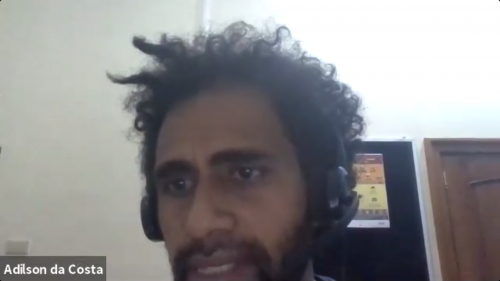 Adilson da Costa Junior, Strategic and Engagement Lead of Oxfam in Timor-Leste, expounded on the need to align the implementation of internet and media freedom-related legislation with transparency and human rights mechanisms. da Costa further elaborated on how the agenda-setting priorities by the government of the day would determine when these internet freedom-infringing laws would be implemented. Legislation is a valuable political tool, it is feasible that the shelved draft defamation law will be passed eventually, as the political impetus exists.

Dr Gomez concluded the discussion. Again, while speaking from a regional angle, he made reference to Timor’s continued pursuit of accession to the ASEAN. The authoritarian-heavy nature of the group could potentially compromise Timor’s protection of human rights and internet freedoms, given the groupings’ poor performance in these issues. He emphasised that the implementation of the draft legislation in its current form, risks Timor’s internet freedoms staining the country’s democratic identity.

To ensure that Timor protects itself from enacting 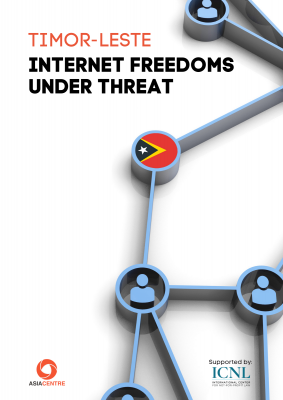 unjust “internet” legislation and other laws, it needs to clearly signpost the processes for proposed laws. Transparent communication and consultation with civil society and other stakeholders should be at the heart of this process.

Asia Centre’s newly-released report “Timor-Leste: Internet Freedoms Under Threat” can be downloaded from (here) and is a part of a series of reports on the state of internet freedoms that include Myanmar and Cambodia