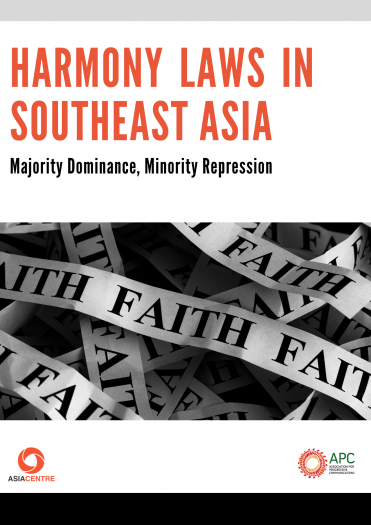 Harmony Laws in Southeast Asia: Majority Dominance, Minority Repression analyses the legal framework and the impact on Freedom of Religion or Belief (FoRB) and racial discrimination in Malaysia, Myanmar, Philippines and Singapore. Colonial era-laws are being supplemented with “harmony” and other laws to manage communal tensions. All four countries are ethnically and religiously diverse with colonial histories and primarily make use of legal provisions to maintain public order and internal stability while appeasing the ethno-religious majority. These legal measures often compromise FoRB and the airing of grievances of minority communities. In Malaysia, the divide between the Muslim majority and the rest of the country remains strong. In Myanmar, the Bamar-Buddhist nationalism contributes to the communal tension, which has been exacerbated by the 2021 military coup. In the Philippines, there is little state-mandated religious discrimination, but prejudices remain as the influence of Catholicism continues to be strong. In Singapore, appeals to social harmony and secularism obscure the privileges enjoyed by the Chinese majority even as minorities find it legally restrictive to voice their grievances. This report demonstrates how the use of legislation affects FoRB and racial equality and suggests measures to improve the situation.

Business and Human Rights in Asia: Duty of The State to Protect