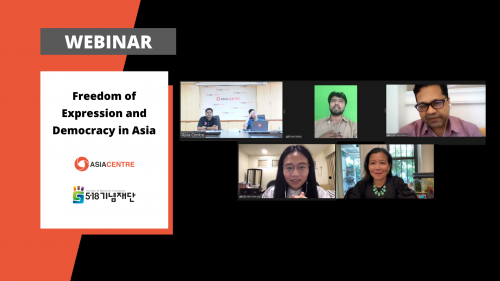 Academic, press and internet freedoms are a cluster of rights that form freedom of expression. To realise these rights, one must have access to accurate information and be able to express an opinion across platforms of one’s choice. This is a fundamental right and we can not allow it to be diluted by authoritarian governments who are increasingly challenging the universality of rights. 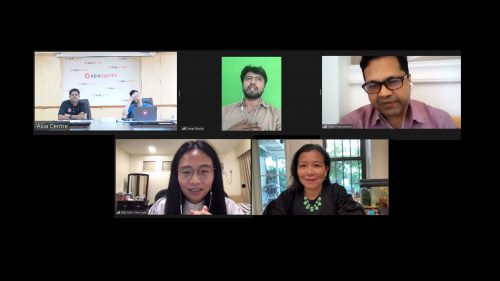 To unpack these issues, Asia Centre, together with the May 18 Memorial Foundation, co-convened a panel, “Freedom of Expression and Democracy in Asia”. The event was held as part of the Gwangju Democracy Forum, and was hosted online and live-streamed over social media on 20 May 2021.

Imperative that all categories of freedom of expression are recognised, Dr. James Gomez, Regional Director at Asia Centre, in his opening remarks highlighted academic, press and internet freedoms as forming a cluster of rights that make up freedom of expression.  Presenting data from East, South and Southeast Asia, he pointed that scores in one area of freedom often tend to mirror scores in other areas and a deterioration of one freedom affects other freedoms in the cluster.

Speaking about developments following the February 2021 Myanmar coup, Khin Mai Aung, an Advisory Board Member at Asia Centre, in a video recording, presented on the state of internet freedoms. She stated that social media has come under attack by the military junta, which sought to control the flow of information through internet shutdowns and throttling internet speeds. In response, the people are using encrypted channels of communication to bypass censorship. Given the ability of the people to adapt, she was hopeful that their resilience will ensure the military junta is overcome.

Against the backsliding of democracy and human rights in Thailand, Yawee Butrkrawee, Programme Coordinator at Asia Centre discussed the state of freedom of expression in the country. He pointed out the culture of self-censorship, resulting from the attack of ultra-conservative groups on university staff and students, choice of news by major media outlets, manipulation of social media by the military, and legal threats by cabinet members, is a major inhibitor of freedom of expression. In a strong show of resistance, student-activists and the youth are engaged in a push back to reclaim and secure a civic space where free and open discussion can take place.

Speaking on media regulation in Pakistan, Umar Bacha, award-winning journalist from Dawn, discussed the increased use of the law to silence criticisms against the government and military. Citing closures of media organisations, retrenchment of journalists, and increased control of social media, he emphasised how such laws target both traditional and new digital forms of media are worsening the state of media freedom in the country. Umar believes this challenge can be overcome if media outlets continue to train journalists to be better aware of legislation, and how to produce effective journalism without fear.

An independent researcher from Taiwan, Lilly MC Lee analysed China’s increasing role in instigating information warfare in her home country and broadly in Asia. In Taiwan, the government had enacted a National Security Law, introduced a nationwide media literacy programme and encouraged the establishment of fact-checking groups to mitigate this problem. She said, despite China’s attempts to enhance its international position through the proliferation of fake news, a blend of laws and non-legal measures can be used to respond to China’s information warfare. In this way, freedom of speech can be defended and a democratic world order maintained.

Pulling the discussion together, Dr. Robin Ramcharan, Executive Director at Asia Centre, emphasised the need to understand all dimensions of freedoms of expression. Protection of all forms of expression is vital, for the encroachment on rights of a singular facet creates an overall deterioration; realisation of this is key. He cautioned that authoritarian regimes are using economic progress as a justification to infringe upon human rights. In this regard, individuals have a significant role in protecting and advocating for their personal freedom of expression.