The trip started off with a technical briefing on 18 November 2019 at the Headquarters of Liberal Democratic Party (LDP) in Tokyo, Japan hosted by Dr. Keitaro Ohno, Deputy Secretary-General and Ryuji Koizumi, Director-General of the International Bureau of Liberal Democratic Party. At that meeting, Dr. Gomez briefed the LDP parliamentary caucus on fake news legislation in Southeast Asia and its use as an intervention tool by foreign governments and possible measures to counter this. 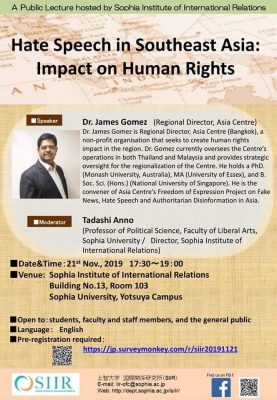 Aside from this technical briefing, Dr. Gomez delivered 5 public lectures at different Universities in Japan. In Tokyo, Dr. Gomez spoke at Gakushuin University and at the Institute of International Relations, Sophia University on 20 and 21 November 2019 respectively. These lectures focussed on hate speech, because hate speech is a potent by-product of fake news that is giving rise to violence and communal strife; this was one of the major findings on the International Conference on Fake News and Elections (10-12 July 2019) organised by Asia Centre. 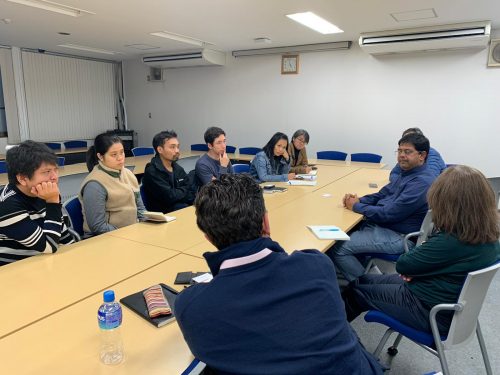 Rounding off the trip, as part of the Centre’s strategic engagement to formalize collaboration via MOU, the Centre signed two MOUs with institutions in Japan. On 25 November 2019, Dr. Yoko Hayami from the Centre for Southeast Asian Studies (CSEAS), University of Kyoto, signed an MOU with Asia Centre. On 27 November 2019, Prof. Eiko Kato-Otani, President of Osaka Jogakuin University signed an MOU with Asia Centre. The MOUs provide the framework for the institutions to undertake joint research, co-convene activities and facilitate visits or internships.

In sum, the Sumitomo Foundation research grant enabled Asia Centre to enhance fake news literacy among Japanese stakeholders as well as engage in partnership-building activities to facilitate collaborations. The trip follows the Centre’s recent Japan-ASEAN Roundtable on 4 October 2019 and an outreach trip in 2018 to Tokyo, Japan. In East Asia, the Centre has been building up it’s engagement starting in 2018 and 2019 with other outreach trips to South Korea and Taiwan.