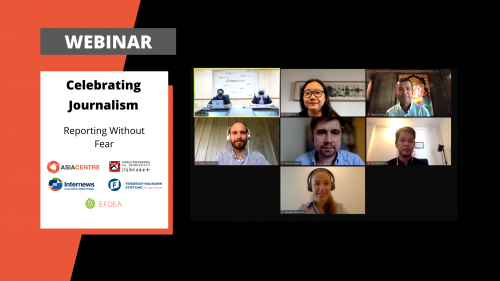 Media in the region are facing challenges both in terms of state censorship and financial sustainability. However, in almost all circumstances, innovation and improvisation were key to overcome these hurdles. 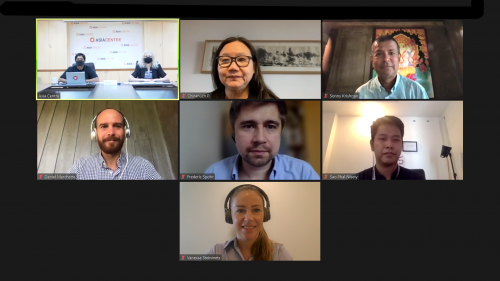 “Celebrating Journalism: Reporting Without Fear” was held on 4 May 2021 to mark World Press Freedom Day. The event was organised in partnership with Asia Centre and Friedrich Naumann Foundation, with speakers from Internews, EFDEA and Taiwan Foundation for Democracy networks. The event was hosted online and live-streamed over social media (watch here).

Frederic Spohr, Head of FNF Thailand and Myanmar, Friedrich Naumann Foundation for Freedom, in his opening remarks stated that many journalists and news organisations are under increasing pressure from governments and state-backed actors worldwide. Despite this, transparent and reliable journalism is still on the rise due to the ease of information sharing provided by the internet and through citizens’ group commitment for freedom of expression.

Sao Phal Niseiy, editor-in-chief from Cambodianess, outlined how the COVID-19 lockdown of Cambodia in 2021 reduced the ability of news companies to report on current events. Instead, the pandemic has perpetuated government propaganda as only state sponsored media are allowed to move between regions, reducing journalistic integrity within the country. However, Cambodians do value transparent news sources as they provide a platform which they can trust in order to stay safe from the virus. Hence, there is a role for independent journalists and media companies to play.

In Myanmar, citizens participating in the civil disobedience movement and the journalists there are deeply intertwined with the media. Commenting on the 1 February 2021 coup, Dr. Lisa Brooten, an Associate Professor in the College of Mass Communication and Media Arts at Southern Illinois University, said  the military junta want total control over the media to legitimise themselves. Nonetheless, the use of social media platforms, creative citizen journalism, and the general populace’s commitment to democratic values, has caused the censorship and propaganda drives by the junta to fail.

Speaking about Thailand, Chiranuch Premchaiporn, a former director of Prachatai, made the point that journalists are integral in the fight for freedom of expression, as they record events and have the ability to hold the government accountable. However, journalists face a constant decision between safety and quality coverage of current affairs. She enumerated examples of incidents where journalists have put themselves in danger during the student protest crackdowns in Thailand. She shared a quote from an imprisoned Prachatai journalist; “people and press are freedom partners”, citizens and journalists have to join hands together to guarantee freedom, true journalism means speaking up despite the risks.

Daniel Marchette, General Manager of Southeast Asia Globe, discussed the challenges of sustainable business operations for small media outlets. He said that COVID-19 had accelerated the existing trends affecting the media industry. Smaller local news outlets relying on advertising and sponsorship, and those that are struggling to or haven’t made the transition to digital media, have been hardest hit. This has the potential to exacerbate the trend of acquisition of smaller media outlets, leading to a higher concentration of information sources, and fewer perspectives being shared as a result.

Sonny Krishnan, Internews’ Regional Humanitarian Advisor COVID-19, pulled together the key points from speakers. He said, despite much negativity surrounding the state of the region alongside an overall fall in the press freedom index within Southeast Asia, there is hope. We can see this in how citizen journalists innovate and continue the critical reporting necessary to promote real awareness of ongoing events. Measures being taken by governments would not work without community support.

Against a backdrop of an overall rise in authoritarianism already taking place in Southeast Asia, limiting media freedoms, COVID-19 has aided in accelerating this decline. Yet the pandemic has also brought to light the value that free media can offer in providing a platform people can turn to for reliable information, to keep them safe, and expose mismanagement by governments.

Getting To The Other Side of the Myanmar Coup