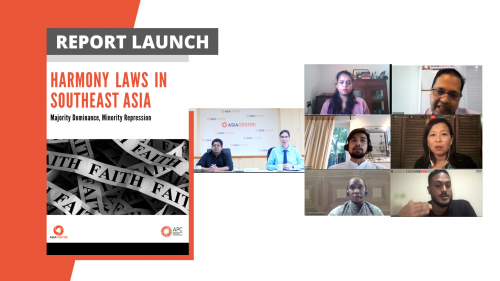 Anti-discrimination laws and independent commissions are needed to protect minorities disadvantaged by legal measures that are claimed to be enacted to maintain social harmony. This was a major recommendation arising from the discussion during Asia Centre’s launch of its new baseline study “Harmony Laws in Southeast Asia: Majority Dominance, Minority Repression”

The study, in partnership with the Association for Progressive Communications (APC), was released during an online event on 22 November 2021 as part of the 7th annual Southeast Asian Freedom of Religious Belief (SEAFORB) Conference. The report reviews how “harmony” and other laws in Malaysia, Myanmar, Philippines, and Singapore have limited freedom of religion or beliefs (FoRB) and accentuated racial discrimination.

In her welcoming remarks, Pavitra Ramanujam, Project Coordinator, APC, pointed to the growing ethno-religious authoritarianism in the region that has resulted in crackdowns on minorities, activists, and journalists. She highlighted the importance of analyzing impacts of new legal measures to address issues related to religious, racial harmony, and hate speech.

Dr. Balazs Szanto, Senior Researcher, Asia Centre, in his welcome remarks, said the study was coming at a very important time where intolerance has creeped into the global political landscape, including the Southeast Asian region.

Dr. James Gomez, Regional Director, Asia Centre, presented the new report. He said that the suite of “harmony” and other laws perpetuate the dominance of the ethno-religious majorities in the four countries studied. The intersectionality of religion and ethnicity facilitates an environment that props up majoritarian groups and suppresses the voicing of grievances by minority communities. Dr. Gomez recommended passing anti-discrimination laws and establishing indepednet anti-discrimination commissions to monitor, track and seek remedies to discriminatory laws and policies.

Lutfi Hakim, Asia Centre Associate and Columnist, discussed the situation in Malaysia where racial discrimination are tied with religious intolerance as the Malay-Muslim majority pushes back against the religious practices of non-Muslims. He added that a lack of understanding of discrimination and public sensitivity of the issue among the majority population created difficulties for governments in creating a reform on religious and racial issues. He concluded that conversations on human rights need to take place to for change towards unity and tolerance of different groups.

Khin Mai Aung, Advisory Board Member, Asia Centre, explained that the current political developments in Myanmar are a result of majority rule without systemic protection of minorities. It came about from a system where rights of minorities were continuously peeled away. The increasing use of harmony laws after the coup seized power have been oppressing ethno-religious minorities.

Asst. Prof. John Phillip Binondo, Lecturer at De La Salle University Manila, presented four issues which hindered racial harmony in the Philippines: the absence of official data about the ethno-religious diversity, the lack of independent bodies to assess legal measures, the profiling of the Muslims and indigenous people, and the role of the Catholic Church. He stated that robust studies on ethnic inequality as well as a better understanding across ethnicity and religion are needed to overcome these systematic racial and religious issues.

Subhas Nair, a rapper, offered his lived experience as a “brown skin” minority in Singapore. He explained that in the city-state minority representation rules create an idea of ‘model minority’ leaders who are tokenised in service of the ethnic majority rather than actually work for the community they are supposed to represent. Furthermore, through a process of reverse engineering, Singapore’s Ethnic Integration Policy in public housing delivers a Chinese majority voting base. He ended by emphasising the importance of having measures to create racial equity and to hold the government accountable.

Among the questions raised by the participants included was the possible merits of limiting FoRB to harmonize societies or whether FoRB will spark violent protests like that in the US. The speakers responded by saying that laws that restrict FoRB are counterproductive to the goal of reaching tolerance of different beliefs and ethnicities. They added that oftentimes the US is used as a bogeyman for not having anti-discrimination measures in the first place.

Dr. Robin Ramcharan,  Executive Director, Asia Centre closed the panel by stressing again the intersectionality between ethnicity and religion. He ecohed the call for anti-discrimination laws be enacted to protect their rights and freedoms of minorities, and urged governments, international organizations, civil society organistions, and faith-based organizations to create equality among different beliefs and ethnicities.

After the presentations, a key focus of the Q&A session was whether the main responsibility for ethics lies with the individual, organisation, society or was it structural. The discussion pointed to an need for individual responsibility as well as an accompanying change needing to happen at the societal level to influence the institutional level. Since journalists remain in a tough position, the voices of NGOs and the public are crucial to push for stronger ethics. Their support and their demands will be the main drivers of change. Therefore, observers and readers also share a responsibility in promoting ethical reporting.

“Harmony Laws in Southeast Asia: Majority Dominance, Minority Repression” can be downloaded from here, and the event’s live stream recording can be seen here. 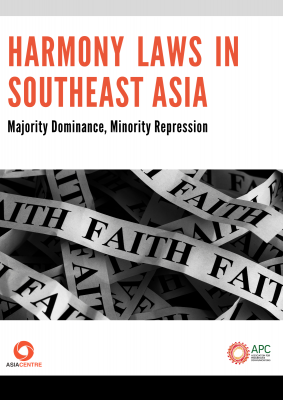 Asia Centre works on human rights issues related to freedom of religion or belief, hate speech and racial discrimination. If you would like to collaborate with the Centre on evidence-based research, co-coveneing activities or other projects. Send an expression of interest to contact@asiacentre.org

Media Literacy As a Tool Against Fake News in Malaysia