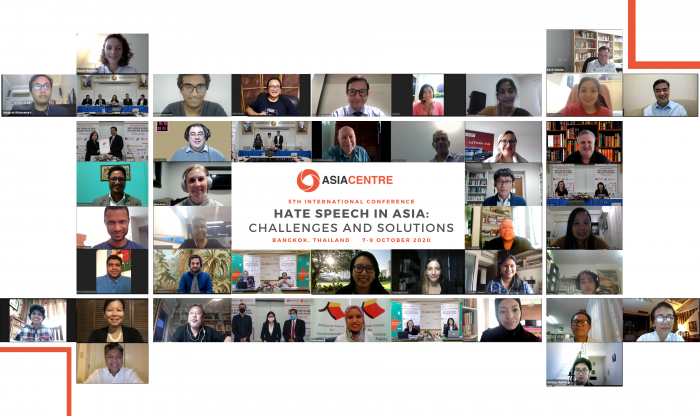 From 7 to 9 October 2020, Asia Centre convened its fifth International Conference on Hate Speech in Asia: Challenges and Solutions. Due to the ongoing COVID-19 travel and health advisories, this conference was convened as a hybrid event with participants joining in-person as well as teleconferencing from locations worldwide. The Law Faculty of Thammasat University was the location for the first day of the conference. Thereafter, starting that evening, panels were hosted in Asia Centre’s office and online.

Into its 5th year, Asia Centre’s annual conference continued to grow from the previous year in spite of the pandemic. There were 18 partners who convened fifteen panels and one information session. The Centre facilitated the presentations of 47 speakers of which 45% were female. Furthermore, during these three days, a total of 40 people attended physically at the Law Faculty, Thammasat University whilst all others logged in online for all other conference sessions over the three days. 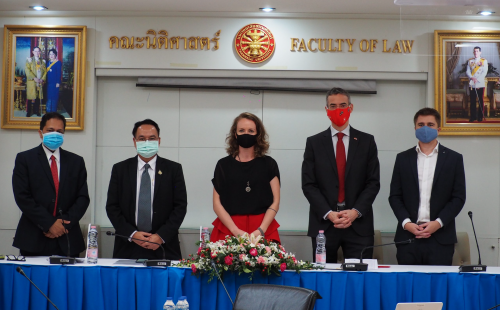 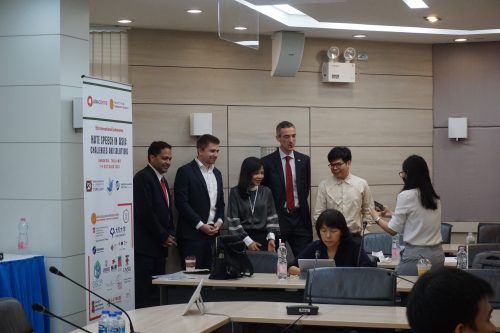 On the first day, discussants addressed how hate speech fuels conflict in Thai democracy emphasising cultural aspects; hate speech, religion, and racism in Thailand noting topics such as passive hate speech and digital literacy; philosophical perspectives of hate speech and the impact of linguistics in creating social divide; and the political weaponization of hate speech and its impact in Malaysia, Myanmar and Sri Lanka.

On the second day of the conference, panelists discussed 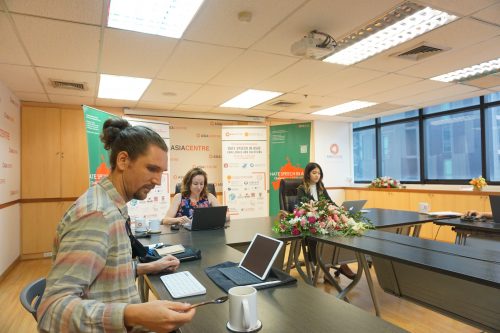 the multi stakeholder inputs needed to address some of the key symptoms of hate speech such as nationalism, xenophobia, political ideologies, religion and minority groups. The role of government, private and public sector, and civil society were further touched upon throughout the day. Social media companies, as facilitation platforms of hate speech, were examined from both narratives. The nature of gender, mobilisation tactics, youth and importance of digital were emphasised once again. Discussants also noted populist religious groups’ knowledge sharing which is displayed through hate speech campaigns sharing similar information, format and trends.

The third and final day of the conference commenced with discussions on a hate speech project led by the Online Hate Prevention Institute’s Andrew Oboler. Later in the day, during the CALD panel Abhisit Veijjajiva (Former Prime

Minister of Thailand) and Francis Pangilinan (Senator to the Republic of the Philippines) discussed issues related to political hate speech and the need for a neutral standard setter. The third day’s speakers also discussed the legal regulation of blasphemy with focus on the courts and prosecutors, politicians and governments. Further, the relationships between regulation and religion in incorporating cultural dimensions were examined. The role of Artificial Intelligence (AI) software to regulate hate speech on social media platforms were also noted. In terms of regulation, discussants shifted responsibility between governments and technology companies.

Over the 3 days, the conference participants addressed

amongst others the religious, cultural, ethnic, legislative, political, and technological aspects of hate speech which contribute to the multi-faceted dimension of the issue. The key focus of the conference evolved around legal and non-legal solutions that public, private and civil society stakeholders can take to mitigate the spread and harm of hate speech. Although legal measures were mainly touted there were concerns over who defines what is hate speech and the overall impact on freedom of expression. As conversations progressed, three clear commonalities in the discussants’ analysis emerged: The increasing role of social media as a hate speech facilitator; the reinvigoration of hate speech pushed by COVID-19; and the lackluster efforts from technology companies and governments alike in rectifying the issue.

A range of issues related to hate speech were discussed over the course of three days. Papers submitted will be made accessible via the Conference Proceedings later in November 2020. Thereafter Asia Centre will announce a separate book project on Hate Speech in Southeast Asia. Recordings of panel sessions and a video overview of the conference are also available on Asia Centre’s YouTube channel. 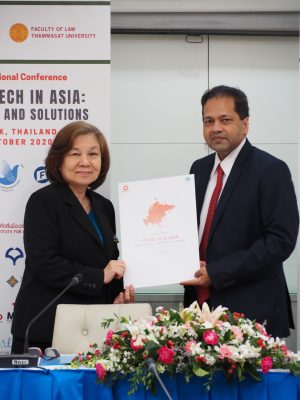 Asia Centre and the National Institute of Development Administration also took the opportunity to announce their partnership for next year’s conference. Professor Yubol Benjarongij (NIDA’s Graduate of Communications and Innovation Management) outlined the rationale for the 6th International Conference “COVID-19 in Asia: Communication, Nationalism, Technology” from 6 to 8 October 2021. Professor Benjarongij mentioned the next conference will allow participants the timeframe to assess how COVID-19 has impacted communications infrastructures, led to the rise of nationalism and  discuss how technology has changed the way we work and do business.

Asia Centre is presently calling for expressions of interest to partner for the 2021 conference. To register your interest, please send an email to research@asiacentre.org