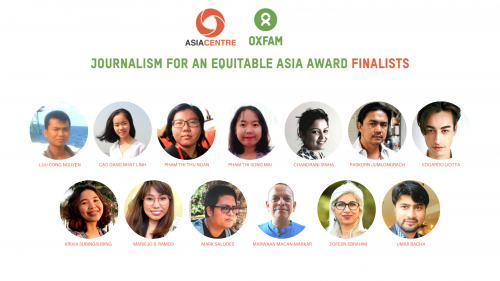 Asia Centre and Oxfam in Asia are pleased to announce the finalists for the 2020-21 Journalism For an Equitable Asia Award.

As thought leaders and creators, journalists have the skills and voice to expose social issues of the challenges during the COVID-19 pandemic in Asia such as inequality, poverty and dysfunctional governance.

Journalism for an Equitable Asia Award, co-hosted by  Asia Centre and Oxfam in Asia aims to recognize them and encourage more journalists to write for a fairer Asia.

Umar Bacha is a young journalist from Shangla, Khyber Pakhtunkhwa province in Pakistan. Currently associated with Dawn media group as a district reporter, previously he worked at the Express Tribune, Express news Tv and Aaj tv. Primarily, he is interested in reporting on human rights, education, tourism, and health.
Read his article: “Braving hostile terrains and attitudes, the women at the heart of KP’s Covid-19 battle” here.

Marwaan Macan-Markar is a Sri Lankan journalist who reported from the frontlines of the South Asian nation’s ethnic conflict for national newspapers in the 1990s. He then left for Mexico to write for an international news agency that covered the Global South. He has reported on political turmoil, human rights violations, poverty and inequality, economic change, natural disasters, and health pandemics in Latin America, Africa and Asia. He now covers Southeast Asia and South Asia for Nikkei Asia, a Tokyo-based publication.
Read his article: “Thailand’s economic ‘death by a thousand cuts’ sows desperation” here.

Mark Z. Saludes is a Manila-based writer and documentary photographer whose works
focus mainly on social injustices, human rights, the environment, indigenous people, and the
climate crisis. He is a reporter for the Catholic news site, LiCAS.news, and a contributing journalist to various international and national media entities. Human Rights Watch, a New York-based rights organization commissioned Mark to document child labor in the small-scale mining industry in the northern Philippine region of Bicol, which was published in September 2015 worldwide. He is currently working on an investigative reporting that tackles the condition of human rights in the country.
Read his article: “Pandemic worsens situation of young mothers in conflict areas” here. 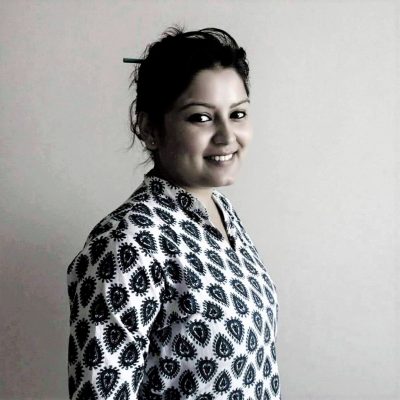 Chandrani Sinha is an independent multimedia journalist, currently based in Guwahati Assam India. She has been reporting stories from Northeast India for 9 years. Currently, she contributes to both Indian and international media organizations. She intensively works on climate change in conflict areas, the environment, and sustainable development along with other human interest stories. She also covers the eastern corridor of India along with all the North-Eastern states. She is also the editor and founder of Badalta Northeast, a website dedicated to climate change sustainable development and solution journalism from NE.
Read her article: “Climate refugees stripped of citizenship in Assam” here.

Edoardo Liotta is a Singapore-raised and Southeast Asia-based journalist currently with RICE Media. At RICE, and in the past with VICE, Edoardo has penned stories about underprivileged groups across the region, focusing on the LGBTQ community, ex-offenders, migrant workers and sex workers.
Read his article: “For Trans Women In Singapore, Appealing To High Beauty Standards Is A Matter Of Survival” here.

Krixia Subingsubing, 25, is a journalist from the Manila-based broadsheet Philippine Daily Inquirer, the largest newspaper in the Philippines.
She is currently covering the Office of the Vice President as well as the human rights beat for the paper. Most of her stories involve issues on social justice, with a particular focus on inequality, state-sponsored abuse and human rights violations.
Some of her works on President Duterte’s war on drugs have also been similarly recognized by award-giving bodies.

Mariejo S. Ramos is a reporter of the Philippine Daily Inquirer. She, along with fellow Inquirer reporter Krixia Subingsubing, bagged the best Investigative Report Award at the 41st Catholic Mass Media Awards in 2019 for their reporting on the brutal “war on drugs” in the Philippines. As a two-time fellow of the Southeast Asian Press Alliance’s Regional Reporting program, she wrote stories about the plight of female prisoners and how state-sponsored disinformation affects democracy. She has also written about various topics on social justice such as the drug war, indigenous communities, people with mental illnesses and mental health challenges, women farmers and prisoners, and the urban poor.
Read their article: “Lockdown-weary jeepney sector faces Dec. 31 deadline” here. 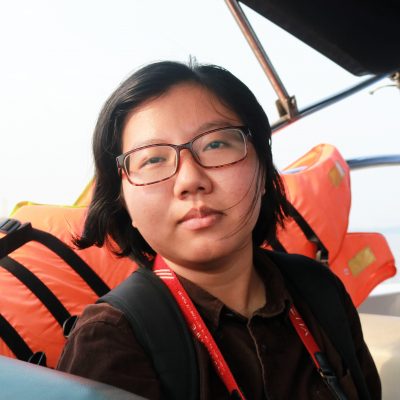 Pham Thi Thu Ngan is a 24-year-old writer under the pen name Pham Thu Ngan. As a young collaborator of the Social and Political Board of Thanh Nien Newspaper, she finds keen interest in fighting for the commoners and the vulnerable communities so they can get more advantages of social security. She learns and practices values: humanity, equality, freedom and justice. Besides her main work, she spends a lot of time for policy advocacy and educating the youth about human rights. Her spotlight reports are “Living in Can Gio Forest”, “Cho Ro ethnic trying to keep ancient spirit”, “Eat dew, sleep in the wind”.

Pham Thi Song Mai has been a collaborator of Thanh Nien Newspaper since her internship. Her area in the newspaper office is Law and Court. There was a time she thought journalists were the people who can travel everywhere, meet many people. But when she knows there are a lot of vulnerable people out there but the policymakers cannot touch, she realizes that this job is also to fight, to write, to raise the voice of them, and aim to an equitable, fair society.
Read their article “Shirts faded from pandemic & Invisible labor” here.

Cao Dang Nhat Linh is a 23-year-old collaborator of Thanh Nien Newspaper. In 2 years of doing this job, she has gained many practical experiences and had chances to meet and talk with the poor. As far as she is concerned, each of them is a different case that needs to be supported. Once, she got into character and intruded into a fake multi-level marketing network. After that, in 2020, the article recounting the fake network helped rescue many students stuck from the trap.

Luu Cong Nguyen, a 33-year-old journalist working at Thanh Nien Newspaper, whose governing body is Vietnam Youth Federation. Becoming a journalist is his dream from childhood. He started his career when he was a Journalism sophomore. Since this time, he had much investigative reporting which stood up to injustice in our society, such as “Selling marine labor” (claimed the B prize at National Press Awards in 2017 for investigative reporting), “Unwritten rules on the river” (claimed the A prize at Press Awards held by National Traffic Safety Committee in 2017). He hopes to reach out as far as possible, to write, to raise the voice of vulnerable communities and the poor.

Pham Thi Thu Ngan is a 24-year-old writer under the pen name Pham Thu Ngan. As a young collaborator of the Social and Political Board of Thanh Nien Newspaper, she finds keen interest in fighting for the commoners and the vulnerable communities so they can get more advantages of social security. She learns and practices values: humanity, equality, freedom and justice. Besides her main work, she spends a lot of time for policy advocacy and educating the youth about human rights. Her spotlight reports are “Living in Can Gio Forest”, “Cho Ro ethnic trying to keep ancient spirit”, “Eat dew, sleep in the wind”
Read their article “Beware of employment traps” here. 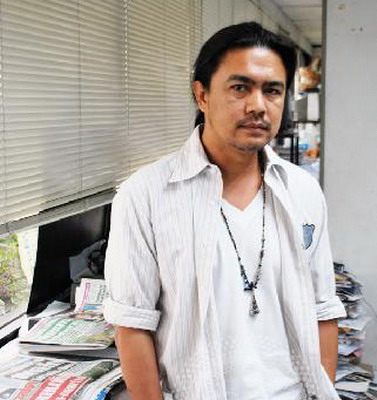 Passakorn Jumlongrach started his journalist profession with Thailand’s top politics newspaper, Matichon. In 2012, Paskorn co-found an independent news agency, Transbordernews. Since 1993, he work to cover issues of injustice,human rights, and inequality. Throughout his profession he is committed to marginalized people and believe that journalism and communication can influence policies.
Read his article: “Poorest hit hard as virus brings society to its knees” here.

The Rohingya Crisis: A Long, Tortuous Road to Security and Justice