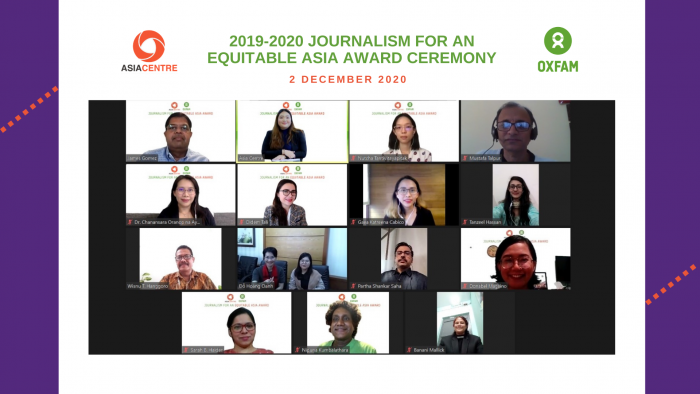 The female-dominated field of the top ten journalists were positively judged on their delivery of high-quality articles on the issues of poverty and inequality in Asia. Out of the twelve journalists, who wrote the top ten articles, eleven were women.

Asia Centre and Oxfam in Asia convened an online award ceremony in place of a face-to-face event due to the ongoing COVID-19 pandemic travel advisories.

For this year’s nominations, there were 100 submissions, from 7 countries in the region including Bangladesh, Malaysia, Myanmar, Pakistan, The Philippines, Thailand and Vietnam, with 25 merit awards, 10 prize awards with 3 winners all of whom were invited to attend the event.

Nipuna Kumbalathara, Media and Communications Lead – Asia, Oxfam International, welcomed all to the event and dedicated the event to all the journalists who continuously use their voice against deep injustices.

Mustafa Talpur, Regional Advocacy and Campaigns Manager – Asia, Oxfam International, in his keynote remarks encouraged emphasising inequalities and injustices as a political agenda in Asia and the Pacific.

During the event, the 3 prize winners were announced by Asia Centre and Oxfam in Asia:

Winner of the award and $1000 prize money was the Turkish journalist Ms. Didem Tali with her article “Our Mother Sold Us for One Lakh Each” published on “New Naratif”. The story about two sisters and other victims in Myanmar, who faced human trafficking clearly convinced the judges.

In second place and the winners of $750 came two journalists from the Philippines, Ms. Jessica Bartolome & Ms. Donabel Magsino followed, for their story “A very long summer” published on “GMA News Online”, a group of farmers for over five months. They documented their daily struggles and how their situation worsened due to “El Niño”.

In third place came Ms. Nutcha Tantivitayapitak, the Thai journalist and winner of $500 prize money reported in her article “The forest reclamation case : when the court sent the Sapwai villagers to prison and off their land”, on the case of Thai villagers who illegally lost their land and their fight against the court. Her article was published in the “Prachatai”.

Dr. James Gomez, Regional Director of Asia Centre, congratulated the winners, finalists, the merit awardees and all who submitted their award tickets for speaking up against inequalities and poverty, in particular towards women as a whole through various lenses.

At the same event, the launch of the nominations of the awards in 2021 was announced by Nipuna Kumbalathara, Regional Advocacy and Campaigns Manager – Asia, Oxfam International exploring the theme of inequality crisis and the pandemic. For those interested in the nominations for next year’s cycle can submit entries here: https://bit.ly/36lPkDX.

We, Asia Centre and Oxfam in Asia, hope to receive your nominations soon and see you at the next award ceremony!