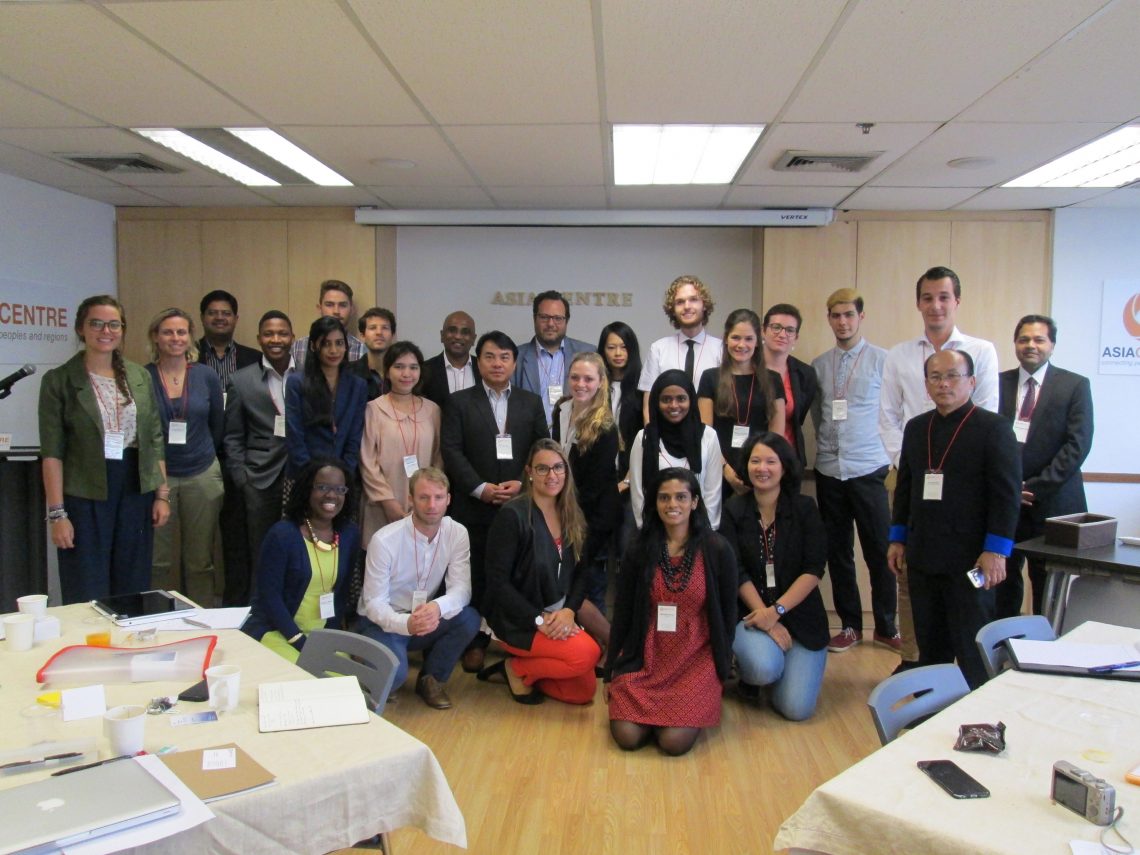 The UPR has been an effective mechanism for putting human rights issues on the agenda and engaging states in conversation about critical issues. However, systemic problems remain with regards to engagement with other stakeholders, the implementation of recommendations by governments, the efficacy of follow up processes and the UPR’s ability to address hard political issues.

These were key takeaways from Asia Centre’s conference, Universal Periodic Review in Southeast Asia: An Evidence-Based Regional Assessment, held from 15 to 17 September 2016 at Asia Centre’s premises in Bangkok. 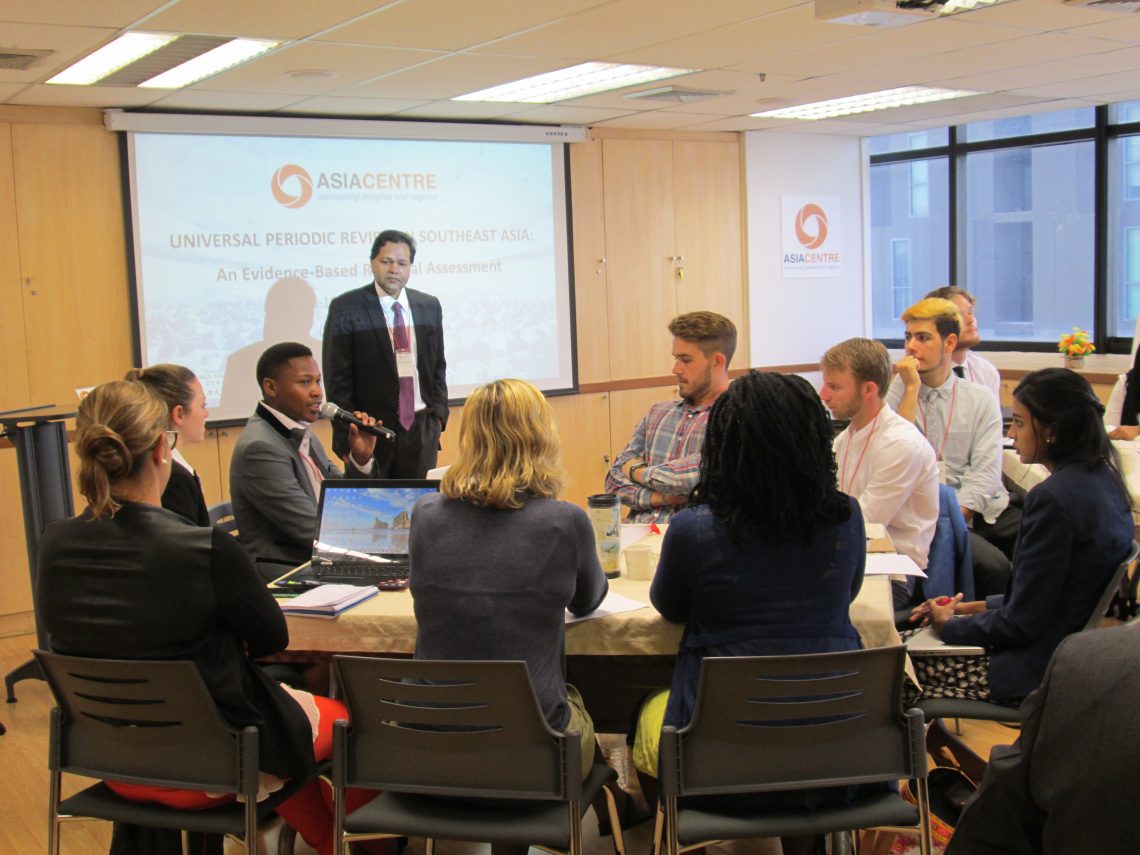 Day One: The Conversation Is Key 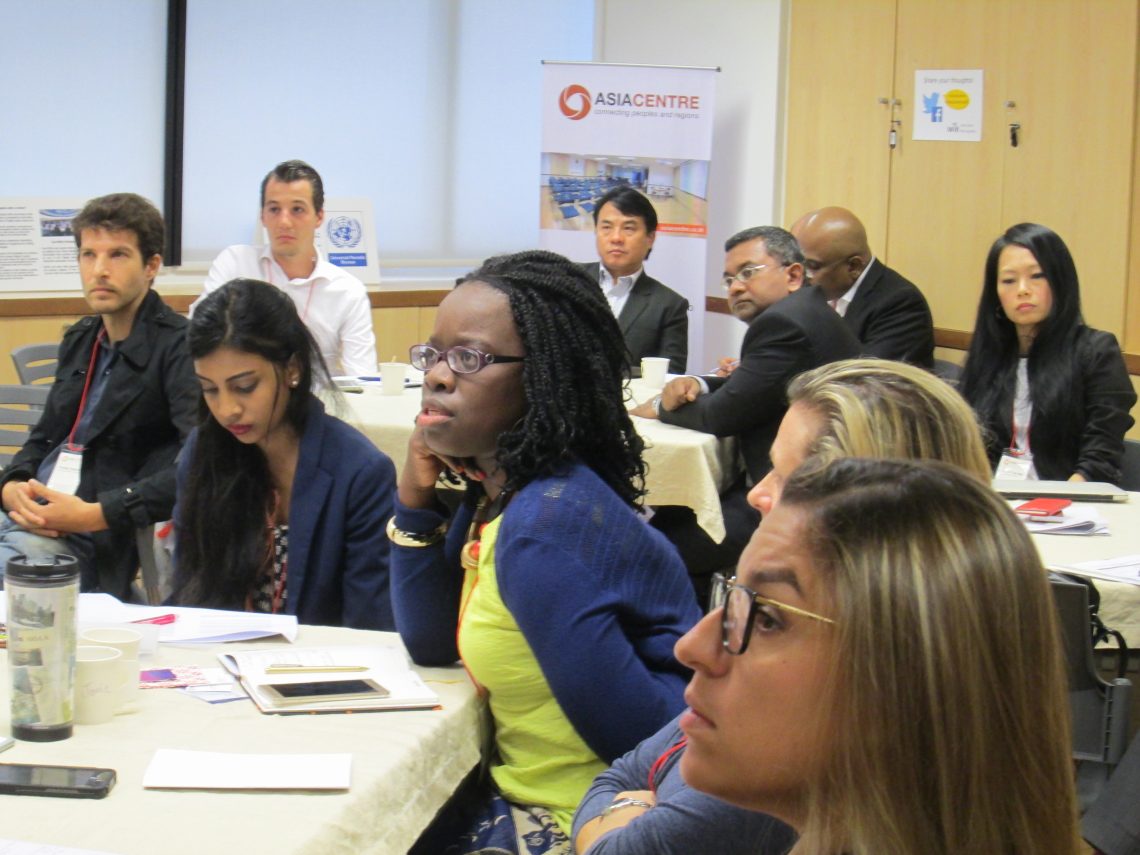 The first day of the conference saw over 30 participants from diverse backgrounds including members of civil society organisation, national human rights institutions, academia, the United Nations, as well as students. Some of the key discussion points to emerge from the first day of discourse, included the value of the UPR as a platform for dialogue, interaction with other UN and regional human rights mechanisms, patterns of enhanced CSO engagement with the process as well as the role that other stakeholders such national human rights institutions can play in monitoring the implementation of recommendations.

There were also issue specific discussions on the role of the UPR in pushing for the abolition of the death penalty and the efficacy of the process in addressing past human rights abuses in Timor-Leste. 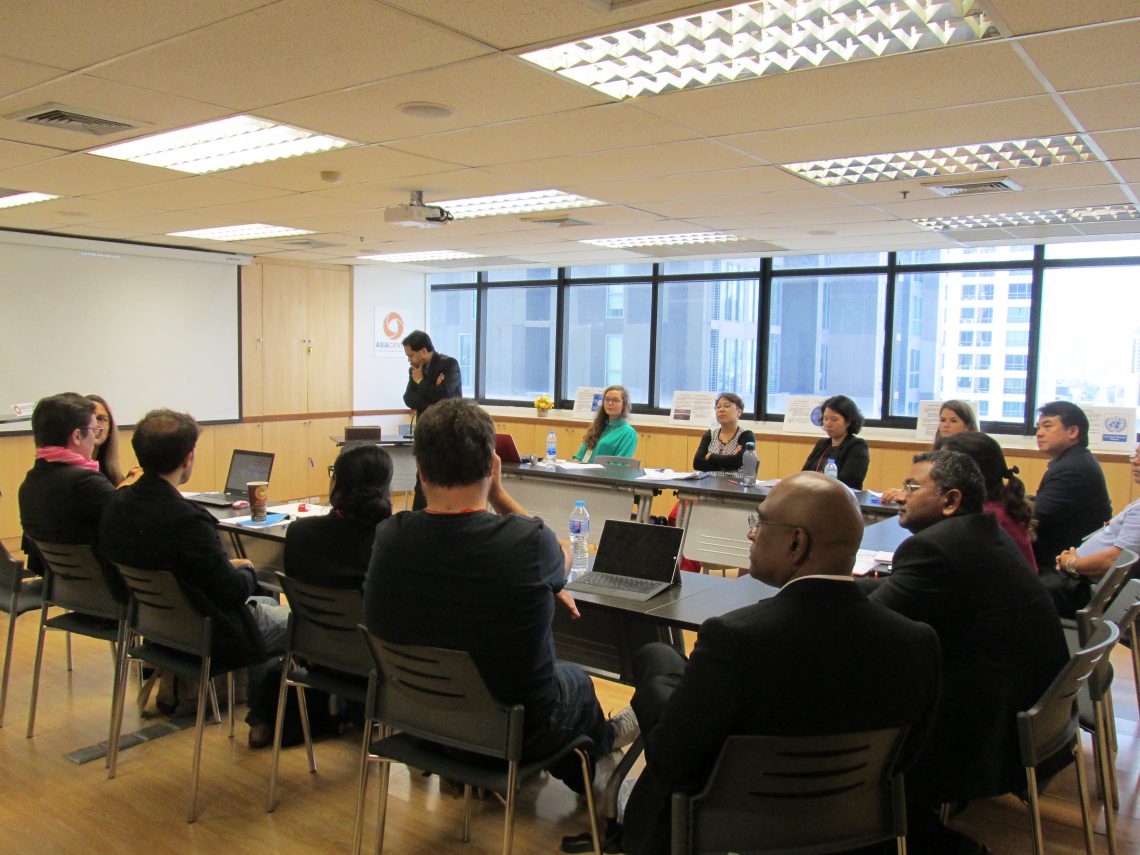 The second day of the conference saw more in-depth discussion on how specific countries were engaging on contentious issues. This covered freedom of expression in Thailand, freedom of religion and belief in Indonesia and civil and political rights in Singapore. The discussion on how minority rights were raised under the UPR centred on the experiences of the Hmong community in Laos as well as a regional overview of the particular challenges faced by LGBTIQ human rights, defenders prepared by Destination Justice. One critical discussion point on day two was the approach to engagement, with the Lutheran World Federation backing making the most of the non-confrontational nature of the UPR dialogue to push for solutions rather than naming and shaming. The plenary session provided an overview of emerging patterns and trends in interaction with the UPR such as greater CSO participation and coalition building efforts.It also called into question the efficacy of mid-term reporting and follow up processes.

Day Three: Southeast Asia & the UPR: All Talk & No Action?

The final day of the conference was an 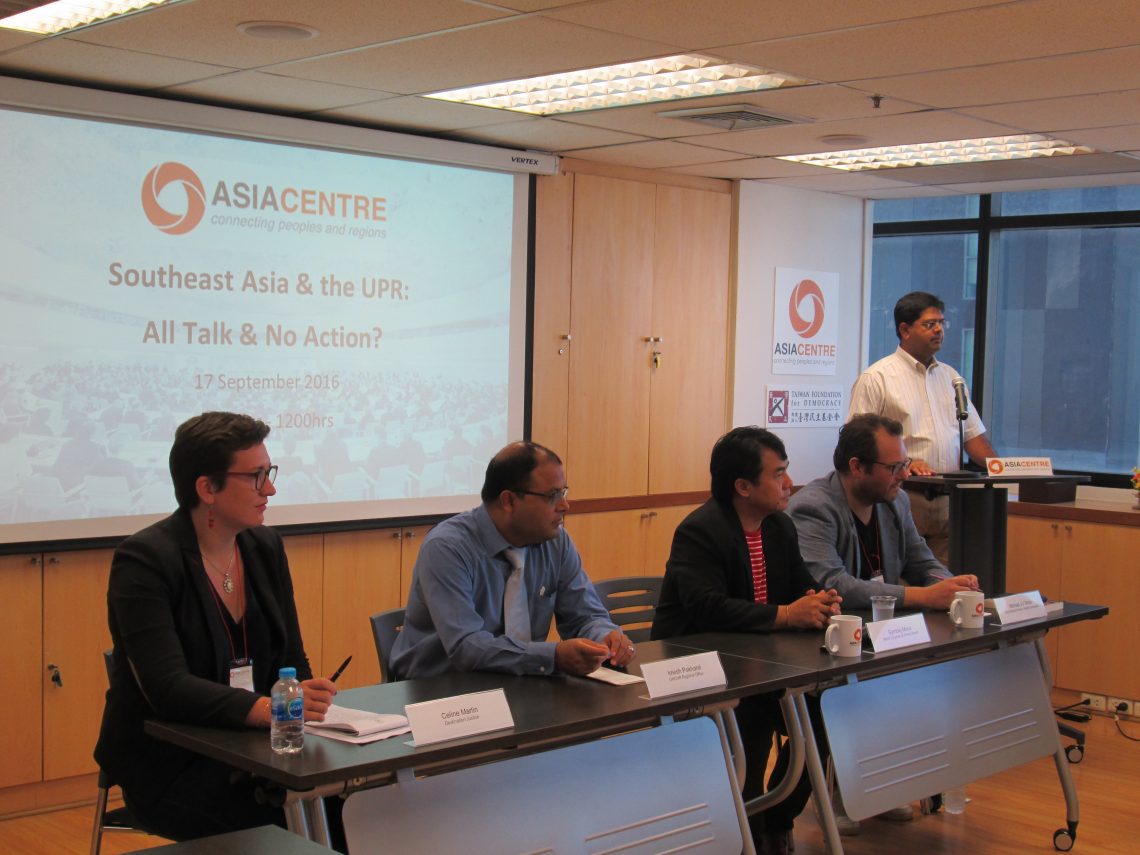 open forum discussion titled Southeast Asia & the UPR: All Talk & No Action? This session was open to members of the public and it attracted an audience over 25 people. The panel featured Imesh Pokharel from Office of the High Commissioner of Human Rights(OHCHR) Regional Office Bangkok, Michael J V White from the New Zealand Human Rights Commission, Celine Martin from Destination Justice and Gymbay Moua from the World Congress of Hmong People. The panelists shared their first hand experiences of engaging with the UPR process, highlighting key challenges faced and offering input on some of the best practices from their respective organisations. It was a very interactive discussion, moderated by Asia Centre’s Robin Ramcharan and it provided a unique entry point into the UPR for members of the public who were interested in understanding the process. 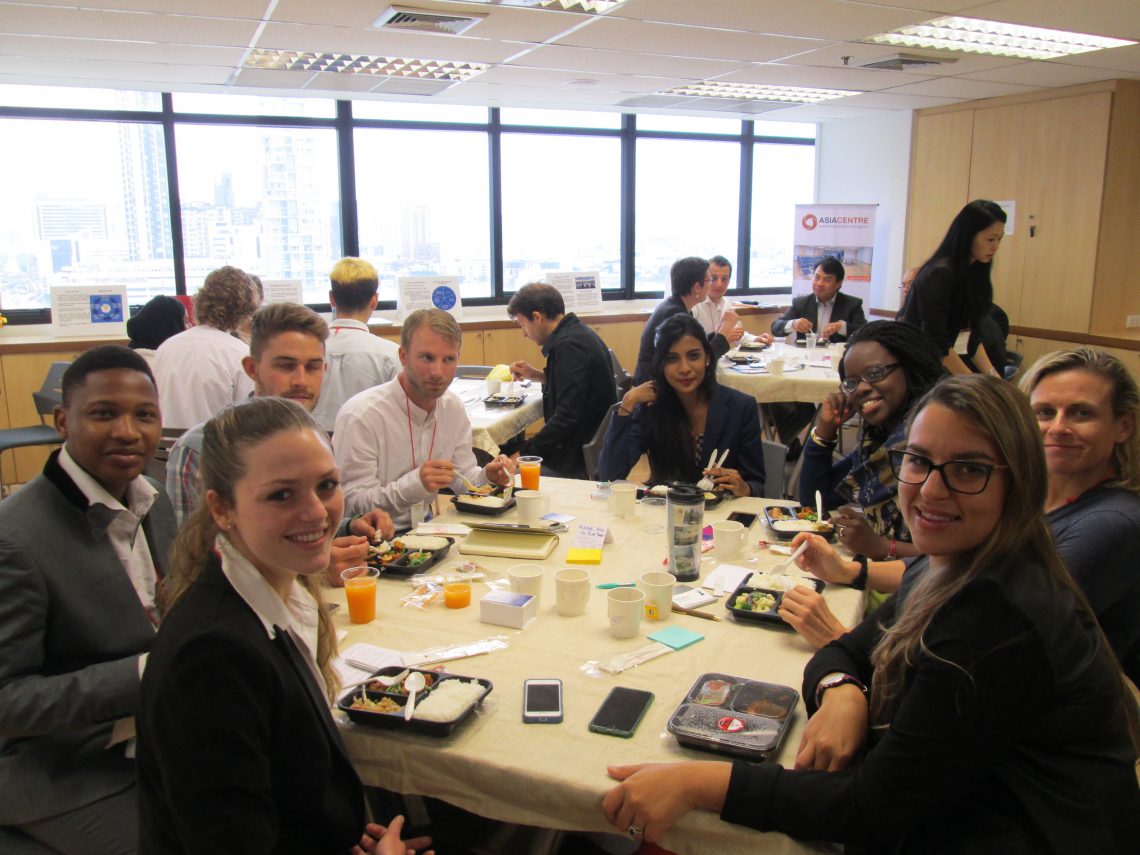 Overall Asia Centre’s inaugural conference was successful in creating a platform for participatory discourse among different stakeholders who are actively engaged in with the UPR. It provided all present the opportunity to identify trends and patterns of engagement with the UPR over the two cycles and provided critical analysis of the UPR’s achievement in Southeast Asia.

The conference inspired Asia Centre’s publication: The Universal Periodic Review of Southeast Asia: Civil Society Perspectives. Published in 2018, it identifies the trends and patterns of engagement with the UPR over the two cycles, provides analyses of the UPR framework’s achievement specific to Southeast Asia, and forecasts the likely developments in the 3rd cycle.