Asia Centre convened its 4th International Conference on Fake News and Elections in Asia which started from the evening of 10 July and went on for another 2 full days on 11 and 12 July 2019. It was the Centre’s largest to date with 12 partners, 13 panels (See Programme), 46 presentations and a total of over 80 participants who discussed various issues related to fake news (See Conference Proceedings) . Watch conference video here.

The Conference kicked off on the evening of 10 July 2019  at the Sukosol Hotel, Bangkok with Asia Centre’s Research and Grants Officer, Ms Tessa Alleblas welcoming the delegates and partners. Next the Centre’s Executive Director, Dr. Robin Ramcharan and Miklos Romandy, Regional Program Manager from Friedrich Naumann Foundation for Freedom Southeast & East Asia made their opening remarks. Both Asia Centre and Friedrich Naumann Foundation acknowledged the benefits of working together on issues related to fake news. 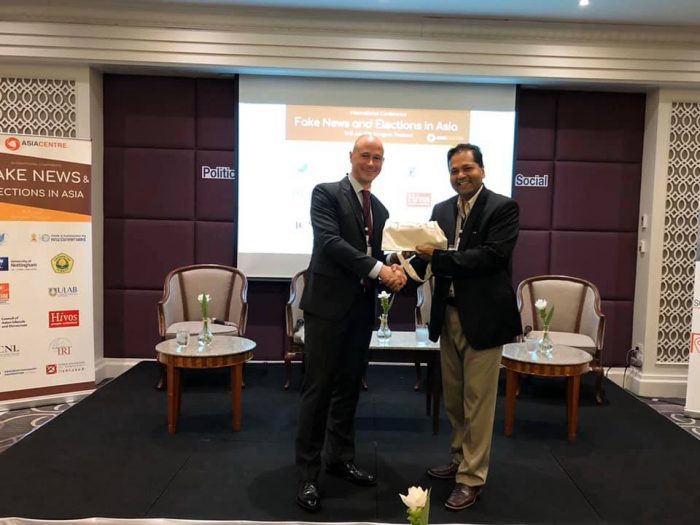 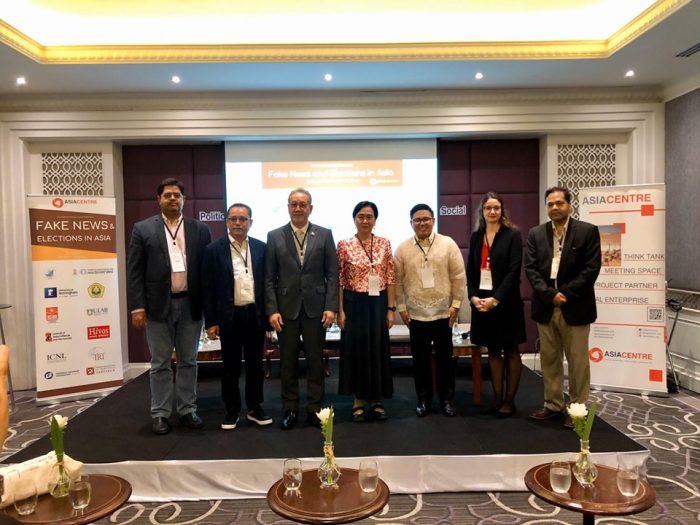 The opening panel was convened by conference partner Council of Asian Liberals and Democrats whose speakers focused on how political parties and political leaders observe and respond to the spread of disinformation in the digital age. The importance of fake news legislation, media literacy and cyber accountability were also recognised by the panelists.

The next two days, 11 and 12 July 2019 were held at Faculty of Communication Arts, Chulalongkorn University. Day 2 of the conference started with welcome remarks by Prof. Parichart Sthapitanonda (See Speech) , Dean of the Faculty of Communication Arts, Chulalongkorn University followed by Mr. Wasan Paileeklee (See Speech), CEO of กองทุนพัฒนาสื่อปลอดภัยและสร้างสรรค์ (Thai Media Fund) and Dr. James Gomez (See Speech), Regional Director of Asia Centre. The  three welcome remarks focused on a partnership approach to tackling fake news issues in the region and the benefits of working together. 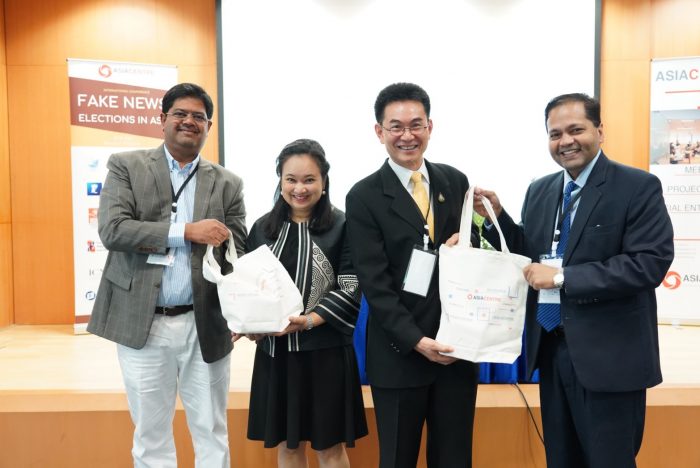 In these two days a total of thirteen panels discussed historical backgrounds of ethnic, political and religious violence, as well as the current phenomena of digital disinformation in Australia, Bangladesh,Cambodia, Estonia, India, Myanmar, Pakistan, Sri Lanka, Singapore, Thailand, United Kingdom and the United States of America. The main discussion point at the conference was whether legislative measures are effective against fake news and if  governments would use it instead against its political critics. Preference was for non-legal measures such as media literacy and fact checking. Although fact-checking measures were deemed to not as effective as media literacy. The key concern whether any of the measures will affect freedom of expression.

After 13 panels and 46 presentations, Asia Centre ran a final session on Post-Conference Publications. For conference proceedings, Ms. Tessa Alleblas explained the review process and the schedule. For the Book Project “ Dr. Robin Ramcharan and Palgrave Macmillan’s Vishal Daryanomel outlined the protocols and timeline.

To wrap up the conference Asia Centre held a partnership dinner at the Sukosol Hotel, Bangkok where Regional Director, Dr. James Gomez briefed partners of next year’s annual conference “Hate Speech in Asia: Challenges and Solutions” to be held from 8-10 July, 2020. The conference is part of the centre’s ongoing 4 year project entitled “Freedom of Expression in Asia.” The Conference on Fake News and Elections was the first in the series, the conference on Hate Speech in Asia, 8-10 July 2020, will be the second conference, while the third will focus on Authoritarian Disinformation and Propaganda in Asia, 14-16 July 2021. The project will culminate with a final conference entitled Freedom of Expression in Asia, 13-15 July 2022.

In terms of publicity, Asia Centre’s 4th International Conference on Fake News and Elections in Asia did get some mention in various media outlets both in Thailand and the region. Before the conference it received a mention in ICE Business Times, during the conference a couple of conference speakers were featured on Khaosod English, and after the conference on Thai Media Fund.

For those interested in sponsoring, partnering or presenting at next year’s conference please email research@asiacentre.org